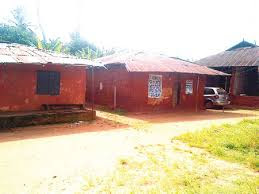 On Tuesday as a man, Christopher Duffoir, allegedly committed suicide at his home in Benin, Edo State

The lifeless body of Duffoir, father of three, who reportedly committed suicide at his Irhirhi-residence in Benin, was found dangling from a ceiling fan by his wife, Eno, who said the deceased started behaving strangely shortly after he returned from Bayelsa State.

It was gathered that the deceased had been taken to a Psychiatric hospital for treatment in the past, but allegedly escaped back home.

The wife disclosed that she left her husband sleeping in the sitting room but when she returned, she saw him dangling from the ceiling.