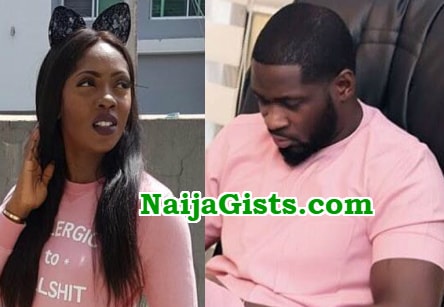 According to the details made available to Cable NG, Tee Billz who couldn’t get over the explosive interview Tiwa Savage granted about him on live TV back in 2016 has decided to divorce the songstress and relocate to the US to start a new life.

His Career and Life Coach, Mr Lanre Olusola told Cable that Tee Billz divorced his wife because he felt that Tiwa Savage likes her singing career more than him.

Tee Billz has since relocated to the United States to start his life afresh.

In the controversial interview Tiwa granted shortly before Tee Billz vanished into thin air, the singer alleged that her husband has made her incurred so much debt that can only be settled if she marries a rich person.

Meanwhile, social media sources are now claiming that  Tee Billz has caught a big fish in the US.

He is reportedly dating a beautiful single mother of two based in Atlanta. Details later.