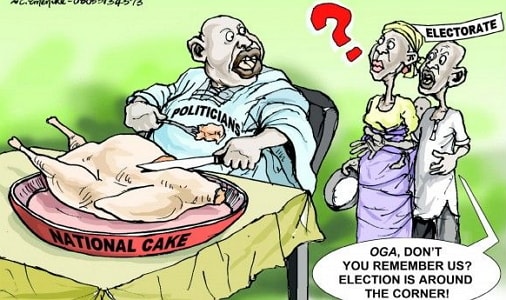 Corruption is a monster that has eaten deep into the Nigerian economy. Many government officials both military and civilian have contributed in bringing Nigeria to the impoverished state that it is in right now and there seems to be no hope in sight. Corruption is responsible for so many problems in the country including unemployment, poor infrastructural development, mass poverty and poor welfare of workers. The current government in Nigeria led by President Muhammadu Buhari has listed the fight against corruption as its number one agenda but the fight has not been an easy one and it doesn’t look like corruption will be eradicated in the country soon. Below are some strategies that if implemented will reduce corruption to a large extent in the country and make life better for the citizens of this great nation.

1) Moving towards a capitalist system of government

A close survey of countries that are economically backward will open your eyes to see that corruption has been a problem majorly in countries practicing the socialist system of government. The socialist system places the wealth of the entire country in the hands of a few to do with it as they please. On the other hand developed countries of the world are largely capitalist nations in which 70% of the work force is employed in the private sector. This removes the problem of corruption because politicians and other highly placed government officials will not have so much of people’s wealth in their hands to embezzle. Therefore people’s standard of living is improved since they work in private sectors where professionalism, transparency and accountability are more celebrated than sentiments and selfishness and greed. I may not know much about the differences but you know what I mean!

One weapon that corrupt officials have used to keep the masses in bondage is religious and ethnic sentiments. Politicians who are being probed for embezzlement charges instigate their supporters to fight for them by telling them they are being witch hunted (although it is true sometimes) because they are Christians or Muslims and the supporters rise up to defend them. In other cases, officials who may be doing well in their offices and trying to liberate the masses are being set up and taken out of office by all means and the masses are the instruments used to achieve this. The leaders tell them such officials are from the North or South or Christians or Muslims so they must be removed. In fact I came across a young intelligent boy in northern Nigeria that said he was willing to go and fight because a senator claimed the government was trying to eradicate northerners. This makes it difficult to get the right people in government and the wrong people out of government since the youths blindly follow leaders who are responsible for their bondage. The people who DON’T want to see Nigeria liberated use the same masses who are in bondage to plot their schemes. Nigerians must wake up and unite to make sure they are well represented without respect for religious or ethnic differences or this country will never know liberty.

Politicians and other top government officials have gotten away with several corruption charges without trial because they belong to the ruling parties or they are being loyal to higher powers and so cannot be probed or convicted of corruption charges. This has to stop if the government of the day and citizens of Nigeria will win the fight against corruption. Some of these charges are true but are never looked into and the same accused people come out in public and are worshiped by the impoverished masses. Again the Nigerian citizens need to rise up and fight against people who monopolise the country’s wealth rather than celebrate them in return for peanuts.

There is this funny issue of immunity clause that allows elected officials to do whatever they will without being probed or tried as long as they are in the office. No wonder the same people keep ruling in elected positions only in different capacities. It is a known tradition in Nigeria today that a governor is automatically qualified for the seat of senator after ruling a state for eight years because there is an immunity clause in the senate that keeps him from being investigated as to his activities while in the office of governor. Nigerians how do you expect a bad governor to behave differently when he becomes a senator? The immunity clause must be removed if corruption is to be conquered in Nigeria. This will ensure that any form of corruption in an office can be investigated immediately and if need be the official is impeached. This will make other officials more careful to avoid losing their offices and quite frankly most of them will not be so keen on public offices as they do right now.

5) Adherence to the provisions of the law

I have not seen a country that has utter disregard for its constitution like Nigeria. The constitution has clearly spelt out how the government should be ran but politicians run it the way it suits their selfish ambitions. For instance separation of power is a key concept of our constitution. For those who are not good with government like me, it means the three arms of government (Executive, Legislative and Judiciary) are to function independent of each other. However it is glaring that this part of the constitution is not practiced. The judiciary in Nigeria is clearly under the executive because the judiciary rules based on instructions from the executive and the chief justice at state or federal level has to comply because he is afraid he may lose his office if he doesn’t. Although the constitution states that the chief justice is to be appointed by the executive, the executive should have no power over him once he is sworn in. until we come to the point where the three arms of government operate independent of each other, there can be no true liberation as the executive will continue to dictate to the judiciary who it should try and how they should be tried. However, I think the legislative still enjoys a level of independence from the executive arm although some still allow sentiments to interfere with their legislative duties.

6) Ensuring the right leaders are voted into power

One of the major challenges we face in Nigeria is how politicians buy voters during elections. People who have been in office for eight years with no evidence of service to citizens come with several promises during elections and get the masses to sell their voting rights for motorcycles, cars, some money and sometimes salt and maggi. The politicians then forget them the moment they are voted into power because they have paid in full as far as they are concerned. Politicians will not take us seriously if we don’t take ourselves seriously. We cry for four years but on the eve of elections we forget all the pain because of a sum of money that is not enough to bring any tangible change to our lives. It is time we wake up and say no to bribes during elections and vote for the right candidates who we can easily kick out of office because we owe them nothing. Only then will politicians take us seriously and then we can truly enjoy the dividends of democracy.

Politicians write many things on their campaign posters such as accountability, transparency and the sort but unless they are made accountable indeed for finances that come through their offices for the people they represent, corruption cannot be dealt with. Like I mentioned in the preceding point, we must not accept bribes from politicians. That way, before a politician runs for another term, he has to meet the people and tell them what he has achieved in the last tem that qualifies him to be voted in again. We must hold politicians accountable otherwise they will use meager amounts of money to blind us and continue to cheat us out of our rights that we should enjoy.

8) Raising children to know that corruption is bad

The Bible says “train up a child in the way he should go and when he is old he will not depart from it.” If we raise the next generation of leaders with the awareness of how bad corruption is and that it should be fought with the last drop of our blood, they will grow up to be men and women who will stand for the truth whatever the cost. This will not work by words of mouth only but by example. A father cannot be falsifying his age to stay longer in the civil service and be complaining about corruption and expect his son or daughter to do otherwise when they come of age. Your children cannot see you buying cars and buildings they know your legitimate income cannot buy and you expect them to listen when you talk about corruption. In fact many youths who are victims of corruption today are only waiting for the chance to occupy any office and steal as much money as they can. I have heard many of my peers say that with all seriousness. Our words must be backed with action for us to affect the next generation of leaders positively.

9) Encouraging entrepreneurship among the youths

Most politicians go into politics because they don’t have anything better to do and because it has been the easiest way to make money, not because they have any vision for the country. If our leaders have been visionary we wouldn’t be in the mess we are in right now. If Buhari’s government is serious about fighting corruption in the long run, it must make youth empowerment a priority. I am not talking about N-Power employment or anything of the sort. I mean empowering innovative youths to become independent entrepreneurs. This will take the eyes of most people off political positions and it will make it easier to filter leaders and get the visionary ones. There are many Nigerian youths with world changing ideas who are being ignored. Empower them to establish on their own and you are on your way to ending corruption.

10) Improve the welfare package of workers

Corruption doesn’t only happen in high places but also in the lowest of places. I had a colleague who had experience working in a local government secretariat and he told me the corruption at the local level is worse than what goes on at the top. Some of the people who take bribes and everything only engage in it because their salaries alone cannot cater for them and their families although it is not an excuse. But improving the welfare package of workers especially at the local level will go a long way in reducing their engaging in corrupt practices.

Corruption is a war all of us my stand to fight if we don’t want our country to get swallowed up by it. Therefore it is the responsibility of all to be faithful in our work and to report cases of corruption to higher authorities no matter how little such acts may seem, for it is the little foxes that spoil the vine. Only then can we be truly free to make Nigeria prosperous again for the good of all citizens.

Global Warming: The Clock Is Ticking And Our Planet Is Weeping, It Is Time We Listen To Her Complains Before It Is Too Late
Historical Facts About Nigerian Education System & The State Of Education In Nigeria Today