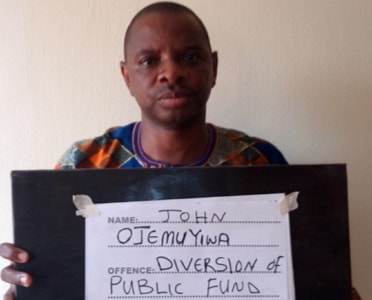 Justice Akin-David Oladimeji of the Osun State High Court sitting in Ede, Osun State has convicted and sentenced one John Ojekorede Ojemuyiwa, alongside his company, Digitpro Engineering Technology Limited to a six- year jail term on two counts of the amended three counts charge preferred against him by the Economic and Financial Crimes Commission, EFCC respectively.

The Convict and his company were awarded a TETFUND contract for the construction of amphitheater at the Osun State College of Education, Ila Orangun. They were investigated and arraigned for offences of stealing and giving of gratification to public officers.

Justice Oladimeji in his ruling found the convicts guilty on counts one and three. Ojemuyiwa and his company were convicted and sentenced to three years imprisonment each on the two counts of the three charges. They were discharged and acquitted on count two. The Sentencing is to run concurrently.

The convicts who were arraigned by the Ibadan Zonal office of the EFCC, on Monday, April 3, 2016 pleaded not guilty to the two counts which were later amended to three-count charge bordering on stealing and giving of gratification to public officers preferred against him.

Ojemuyiwa’s journey to the prison followed a petition to the EFCC sometimes in April 2016 by the Civil Societies Coalition for the Emancipation of Osun, alleging a fraudulent conversion and diversion of .3 Billion Naira (N300 Million Naira) TETFUND approved for sundry projects at the Osun State College of Education, Ila Orangun.

One of the charges against them reads: “John Ojekorede Ojemuyiwa and Digitpro Technology Ltd., sometimes in February 2014 at Ila Orangun within the Osogbo judicial division, corruptly gave the sum of N43,093,694.36 (Forty Three Million, Ninety Three Thousand, Six Hundred and Ninety Naira, Thirty Six Kobo) to members of Governing Council, Osun State College of Education, Ila Orangun, through one David Olayinka Olajede of De Capstone Ltd on account of the award of contract worth N228,298,302.00 (Two Hundred and Twenty Eight Million, Two Hundred and Ninety Eight Thousand, Three Hundred and Two Naira) and the over payment of mobilization fee to you by the Governing Council and the Management of Osun State College of Education.