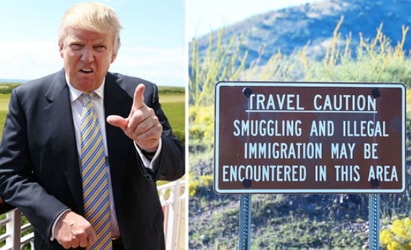 US  President, Donald Trump, has called for immediate deportations that bypass any judicial process in a tweet.

“When somebody comes in, we must immediately, with no Judges or Court Cases, bring them back from where they came,” Mr. Trump wrote on Twitter .

The President’s comments come days after he reversed a policy to separate migrant children from their parents following fierce backlash at home and abroad, the BBC reports.

More than 2,300 children were separated from their parents in May and June.

As of May, all migrants who cross the U.S border illegally face criminal prosecution under the “zero tolerance” policy.

The President did not make the distinction between economic migrants and those seeking asylum.

Mr. Trump has faced criticism, including from his own Republican Party, for his choice of language on Twitter.

When he earlier said immigrants threatened “to pour into and infest our Country,” Republican congresswoman Ileana Ros-Lehtinen tweeted back at him saying his “baseless rhetoric” was “repugnant” and dehumanised those looking for a better life.

Soyinka: Obasanjo Is The Greatest Hypocritical Leader Nigeria Has Ever Produced
The Almighty Zoning Formula: One Of Many Mistakes In Nigerian Politics That Binds Us To Nightmare Of Bad Leadership