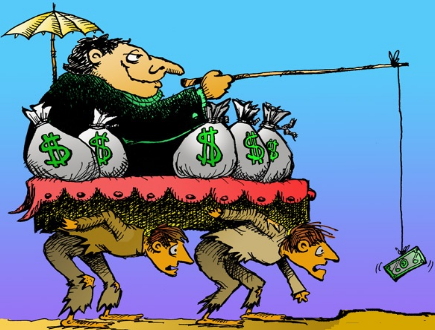 February 28, 2017 – The Conspiracy Of The Rich: How The Wealthy People Profit From The Ignorance Of The Poor

“The rich man’s wealth is his strong city: the destruction of the poor is their poverty”- Proverbs 10:15

The master strategist, Jim Rohn, once said, “If you don’t design your own life plan, chances are you’ll fall into someone else’s plan. And guess what they have planned for you? Not much.” An ancient piece of common wisdom says the poor get poorer and the rich get richer. The wealth of the rich is the ignorance of the people; infact, the rich profits from the ignorance of the poor. There is no man that is poor; every man is rich in something.  The ‘rich’ are rich in ideas while the ‘poor’ are rich in ignorance!  There is a great conspiracy that I will be unveiling in this piece. I can assure you that your boss at work will definitely be ‘mad’ that you are reading this! There is a conspiracy to keep you poor by the elite in the society. As a transformational, entrepreneurial and personal development coach, I will be sharing some controversial truths with you that will revolutionize and disrupt your thought pattern. I will want you to read carefully and painstakingly, the conspiracy of the rich!

THE ILLUSION OF SALARY AND PENSION: Your passion and not your salary is your surest route to wealth. The illusions of salaries and pensions have stagnated the pursuit of many for excellence and impactful adventures. Never get so busy making a living that you forget to make a life! The pursuit of salary and pension has made many to miss golden opportunities. Poverty is Passing Over Opportunities Repeatedly (POOR). The rich baits us with the idea of salary and therefore perpetuate us in a vicious cycle. Pursue your passion, not your pension!

BY TAKING OWNERSHIP OF OUR TIME: Poverty is a reflection of how a man uses his time. One of the critical evidence that you are in the wrong place or with the wrong people is that you will not have time for essential things. Kevin Ngo said, “If you don’t make the time to work on creating the life you want, you’re eventually going to be forced to spend a lot of time dealing with a life you don’t want.” People that are in charge of their time will always be in charge of people that do not know how to use their time. This is one of the core secrets of entrepreneurs. The only difference between a rich person and a poor person is how they use their time. When a man says he is not happy with his life, he is actually saying that he is not happy with the way he has used his time. Time is the only wealth that is truly ours. The more you give it away to people that don’t appreciate it, the poorer you become.

THE RICH ATTRACT MONEY WHILE THE POOR PURSUE MONEY: Patrick Meagher said, ‘’Some people are so poor, all they have is money.’’  Your ambition is poor if it is all about making money. People that attract money will always employ those that chase after money. Barack Obama said, “Focusing your life solely on making money shows a certain poverty of ambition. It asks too little of yourself. And it will leave you unfulfilled.” We attract money with ideas; infact, money flows naturally towards the path of an idea. Poverty is not the absence of money but the absence of ideas. Robert Schuller said, “The poor man is not the one who lacks money but the one who lacks idea”. All achievements, all earned riches, have their beginning in an idea. It is either you work hard to get an idea or you will work hard for people that have ideas. The rich makes us see money as something to be pursued while they attract money! When the ambition of a man is chasing after money, wealth becomes elusive.

THE RICH CHANGE SITUATION; THE POOR CHANGE LOCATION: Great people change situation, every other person changes location! Two young men went to India to invest their resources; they both saw the Indians walking barefooted, some did it out of tradition and others, out of poverty. The two friends pondered deeply on the prevailing situation and eventually, they made their choice. One said, “Business will be bad here, let’s change location”. Then the other gave it a thought and said, “No, let’s change the situation”. The more optimistic young man started producing cheap plastic shoes that the Indians could buy. This young positive man, Thomas Jacob Hilfiger became a multimillionaire in dollars and the owner of lifestyle brand, Tommy Hilfiger Corporation. Some big organizations have designed the idea of periodical transfer of their employers from one location to the other. While they normally do this to prevent decadence and corruption, such transfers also have the potential of disrupting the incubation span of viable ideas in the employees due to unstable location.

THE ILLUSION OF EDUCATION: Bill Gates once said, ‘’I failed in some subjects in exam, but my friend passed in all. Now he is an engineer in Microsoft and I am the owner of Microsoft. ‘’  Some people are so much preoccupied with accumulating degrees and certificates that they forget that the real purpose of education is to solve problems. No matter how educated you think you are, you are still an illiterate if you can’t solve problems! The rich get education to solve problems while the poor run away from problems to get education. Instead of going for another degree, why can’t you sit down and think of a problem to solve?

THE RICH KEEP US SAFE WHILE THEY TAKE RISKS: The poor are safe while the rich takes risks. Safety is a myth. Risk is reality. Denis Waitley said, “Life is inherently risky. There is only one big risk you should avoid at all costs, and that is the risk of doing nothing.” In today’s rapidly changing world, the people who are not taking risk are actually the risk takers! Only those who will risk going too far can possibly find out how far it is possible to go. Jim Rohn said, “If you are not willing to risk the unusual, you will have to settle for the ordinary.” The risk is worth taking to have a life worth living.

SUPREMACY OF GIFTS: Until you discover and nurture your gifts, you will continue to travel another man’s journey. Myles Munroe said, ‘’Wealth does not come from your job; it comes from your personal gifting.’’ The rich lure us into valuing our jobs to the neglect of our gifting. Your job must never take the place of your gift; our individual gift is an indicator of our purpose and calling in life. Any job that does not help us to discover, nurture and develop our gifting and uniqueness is a waste! Education will never make you wealthy; it will only provide a platform to express your gifts. Real wealth lies not in your educational qualifications; real wealth lies in your gift. The main purpose of education is to take us on a journey of self-discovery and to unravel our hidden potentials and gifts. It is pitiable that the kind of education we practice today stifles our initiatives, ‘blankets’ our gifts and teaches man to his own neglect! The Bible says in 1 Timothy 4:14, ‘’neglect not the gift that is in thee’’. The kind of education we practice today has been ‘flawfully’ designed to neglect and abandon our personal gifts. Don’t take a job that is not in tandem with your area of gifting. As a general counsel to entrepreneurs, I will want to say in the words of Myles Munroe: “To know the right places for people, we must know their areas of gifting”.

THE POOR FOLLOW MONOTONOUS ROUTINES WHILE THE RICH EVOLVE DISRUPTIVE INNOVATIONS: Henry Van Dyke said, “As long as monotony and routine dictate the pattern of living, new dimensions of the soul will not emerge”. The rich move forward by evolving disruptive innovations and technologies while they keep the poor with monotonous routines that kill initiatives. The more ‘routined’ you are, the easier it is to replace you! The rich make us more ‘routined’, so they can easily find a replacement for us. Infact, ‘routined’ works are easier to face-out through automation. Any job that doesn’t put a demand on your creativity will ultimately kill your initiative. The rich understand fully that old ways won’t open new doors!

THE POOR ARE ALWAYS ‘WORKING HARD’ WHILE THE RICH ARE ALWAYS NETWORKING:

Warren Buffett said, “If you don’t find a way to make money while you sleep, you will work until you die.” The rich don’t ‘work hard’, they build sustainable systems and relationships. Without great friendship, life is virtually bankrupt. Robert Kiyosaki said, “The richest people in the world build networks; everyone else is trained to look for work.”

If you want to leave the manipulative grip of the rich, you need to break off from your routine and try something new. Evolve new ideas and design a product. Reduce your dependency on monthly salary and focus on finding solutions to the nagging problems around you. Mike Murdock said, ‘’Money is the reward you get for solving someone’s problem’’. It is outright fraud when you plan to get money without solving a problem! If you are too entangled with salary, you might need to design an exit strategy with a professional career coach.

“Control your own destiny or someone else will”- Jack Welch

Continue Reading
You may also like...
Related Topics:poor, rich, wealthy