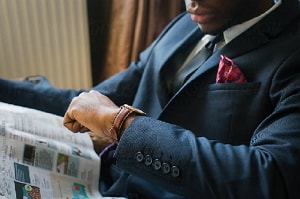 Charles Darwin once said, “A man who dares to waste an hour of time has not discovered the value of life.” There is a culture of impunity that is ravaging the African nations called ‘African Time’. This is an attitudinal and unapologetic disregard for other people’s time without any feeling of remorse. It is only in Africa or probably Nigeria that people come an hour late for a programme or meeting and still expect others to welcome them with reference after intentionally wasting other people’s time. Anybody that wastes your time has succeeded in wasting a chunk of your life!

How much time do you waste every day because of the lateness of others? Waiting for a meeting to start, when the other participants have not shown up? Sitting around at a doctor’s clinic where you had booked an appointment for an hour earlier? Awaiting a report that was due last week, and without which you cannot move on with your own work? Modern economies require millions of people to interact, to exchange goods and services, to work in teams, and to co-ordinate their activities. If these interactions occur at the time they are supposed to, all is well. If they do not, then wastage occurs and resources are lost. How big are these losses?

We really need to wage war against the culture of impunity and indiscipline in Africa. A continent where people arrive on time to watch their favorite movies in cinemas but will seldom be on time for meetings, lectures, appointments, or religious gatherings. One of the countries that have been ravaged by this habit in the past, Ecuador has declared a national war on lateness. After years of whiling away wasted hours, Ecuadoran businesses and civic groups have launched a campaign to force people accustomed to habitually missing appointments and deadlines to start showing up on time. “Symptoms: Rarely meets obligations on time, wastes people’s time, leaves things to the last minute, no respect for others,” reads a poster that has been appearing around the country, dealing with chronic lateness syndrome as if it were a disease.

Ecuador, a South American country famed for its lack of punctuality, has added up the numbers. In this country, more than half of all public events start late. People running on what is called ”Ecuadorean time” habitually arrive 15 to 30 minutes late to parties, social events and even business meetings. According to one study, chronic lateness costs Ecuador an average of $2.5 billion yearly! Businesses and civic groups in Ecuador are trying to instill the habit of punctuality in a culture that is chronically tardy. Ecuador’s economy has suffered in terms of GDP due to this ravaging attitude of the citizenry. That realisation was enough to spur the country into action – after centuries of lassitude. A revolution that started in 2003 with the notoriously unpunctual former president, Lucio Gutiérrez has actually jumpstarted the GDP from $24 billion in 2003 to $69.6 billion in 2010 and $98.6 billion in 2017!

The campaign is thought to be having a beneficial effect. People who are late now lose a great deal more than those who are punctual, because they are barred from participation and are the subject of derision. The principle of punctuality is being embedded in the national psyche of Ecuador; it is fast becoming a shared value.

I have only ever attended very few public event that actually started on time. Where the chief guest is a government dignitary, the duly assembled often languish for hours in the hot sun, awaiting the arrival of the bigwig. In fact, the degree of lateness is often directly proportionate to the perceived self-importance of the personage in question. The most flagrantly late are public functionaries and civil servants. Making you wait is a method employed by CEOs, Governors,  ministers, permanent secretaries et al, to show you just how much more important their time is than yours. It is the ego rearing its ugly head. It is a way of keeping you in your place by showing you disrespect. Lateness can be a way for the rich and powerful to assert themselves, to show how much more valuable their time is. The candid truth is that the same people who keep you waiting for hours for an appointment, then also keep you waiting for years for economic development.

The social psychologist Robert Levine, who has devoted decades to studying people’s ideas about time, suggests that cultures can be divided into those which live on “event time,” where events are allowed to dictate people’s schedules, and those which live on “clock time,” where people’s schedules dictate events. Unsurprisingly, countries that live on clock time are more successful economically than those which do not. In part, that’s because attitudes toward time tend to pervade nearly every aspect of a culture. In hyper-punctual countries like Japan, pedestrians walk fast, business transactions take place quickly, and bank clocks are always accurate. In less punctual places, such as Indonesia, pedestrians amble, workers dawdle, and bank clocks are usually wrong.

One of the major reasons why Africa will continue to lag behind is the penchant for always arriving late to meetings and events. It’s no wonder that it takes so long to get anything done here in Africa, whether it is execution of projects, presentation of budgets or launching of initiatives, the African continent is still many years backward in keeping to time.

IT MAKES YOU LOSE OPPORTUNITIES: A perpetual late comer will always miss out on opportunities. As a business man, being late is a very easy way to lose your current and potential clients. If you don’t deliver certain services on time or if you fail to be punctual for meetings or events you will struggle to keep your business up and running.

IT MAKES YOU LOSE RESPECT: Personally, I have great disregard for people that don’t regard other people’s time. Keeping to time is one of the ways of showing respect to others. Being late is extremely rude. Of all the people I’ve had the pleasure to work with, the most successful ones show up early and always deliver on time. They respect the time of their clients, their coworkers and everyone that they are professionally involved with. By being late, you are telling others that you don’t value their time, and this can lead to many challenges throughout your career.  If you continuously fail to meet your timeline, the word will spread and you will develop a poor reputation. The easiest way to build a good reputation is keeping to time.

IT MAKES YOU LOSE CONTROL: People with penchant for arriving late to meetings are often not in control of their time, which ultimately means that they are not in control of their lives. As one of the management team member in my organization, I have come to realize that when an event is delayed, certain aspects get thrown off schedule and can really tarnish the event experience.

IT IS AN ACT OF SELFISHNESS: People that do not keep to time are always full of themselves. Not keeping to time is an indication that you don’t consider the other person.

IT REDUCES PRODUCTIVITY: It is relatively impossible to get the best out of someone that has the penchant for not keeping to time. Performance is simply a measure of how well you manage time and resources. Poor time management will always reduce productivity no matter how skillful and experienced the person involved is.

IT REDUCES HAPPINESS: It has been observed that people with the attitude of always coming late to meetings are less happy than their colleagues. Promptness has a way of invigorating and energizing the body. It feels so good to always be on time for events! I have often noticed that any time I arrive late for an event, I get flooded with feeling of ‘worthlessness’ and guilt.

The truth is, sullied values are at the root of many of our problems. We cannot have meaningful development in the economy until we attack the rot in our values. Our institutions can only be as strong as our widely held beliefs, not stronger. We must initiate a national campaign against this impunity called ‘African Time’. We live in a global community in which 30 minutes delay in a flight from Lagos to New York can cause unquantifiable loss!

The Ecuadorian revolution is worthy of copying in Africa. In order for African nations to leave the league of third world countries then we have to shelve third world attitudes. And, as the economists Kaushik Basu and Jorgen Weibull have pointed out, in a country where everyone is always late, it becomes rational to be late. There’s no point in getting to a meeting on time if no one is going to be there. The fight against lateness must be done intentionally. If you persuade enough people to be on time, it becomes rational for everyone else to be on time, too. The more people there are who are punctual, the greater the benefits of punctuality. That’s why a national campaign, silly as it may seem, makes some sense.

One initiative worthy of reckoning is the Time Attendance Management System (TAMS) summit, otherwise known as the Time Management and Productivity Summit in Nigeria. This initiative started in 2016 and is set out to reward productivity among the country’s workforce.

TAMS philosophy is built on the ideology that individuals, organisations and countries that pay attention to time management usually experience increased productivity when compared with those who pay little attention to time management. The maiden edition of the summit was captioned under the theme, ‘From African Time to On Time: A Paradigm Shift’, the time management conference aimed to draw attention to the economic impact of ‘African Time’ on productivity in the progress of individuals, organisations and nations of the world. TAMS novel initiative has helped organizations to digitally monitor employee’s timeliness and optimize human resource management.

Though, a campaign of this magnitude might not immediately produce the desired result but it will create awareness and also open us to the fact that this cultural impunity is not immutable. Whatever we endure or do not confront, then we cannot change.

Punctuality is gradually becoming a myth in Africa, because it is seldom rewarded. Maybe someday Nigeria, as well as other African nations will be welcomed into the community of punctual nations. And that might lead us to a higher form of campaign against the hydra headed monster called corruption in Africa. I believe strongly that similar efforts might help wipe out other corrosive cultural tendencies around the world, like corruption.

Just like the revolution was inspired by Ecuador’s younger generation, I believe that the African youths should rise up to collectively challenge the malady that has rendered the continent redundant. We must all be guarded by this time management philosophy: You are wasting someone’s time by being late!

QUOTE OF THE WEEK: “Short as life is, we make it still shorter by the careless waste of time”-Victor Hugo

Continue Reading
You may also like...
Related Topics:african time

Prince Of Daura Re-election Declaration: A Wake Up Call To All
Daddy Freeze: The Deceptive Voice Against The Church Of God