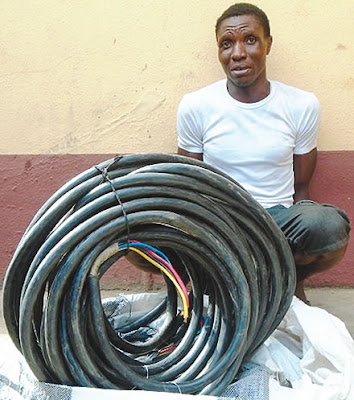 Meet 29-year-old Lucky Udeagwu who wasn’t so lucky over the weekend after RRS officials on patrol caught up with him while attempting to steal a 35-metre long armoured cable for project Light Up Lagos.

Udeagu was caught at Ogudu area of Lagos with two accomplices who later escaped into the bus around 3am on Saturday.

This is what RRS commander said about the arrest:

Because it is straight road, we could see them from a far. They dropped the bag at the bus stop. “When they sighted RRS vehicle, they took to their heels in different directions. But Lucky was not so lucky; we caught him.

At the time of his arrest, Lucky had screw driver, spanner and other tools in his possession.