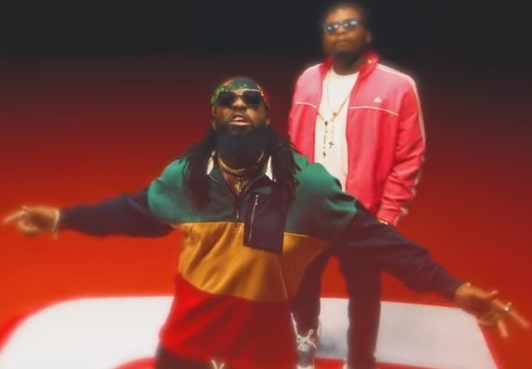 Timaya just released his latest music video, in a collabo, featuring Olamide. The title of the music is Bam Bam.

Let’s take a look at the trending musical collaborations in Nigeria.

The Nigerian music industry is, no doubt, the most prominent in the whole of Africa. We get treated to the best of bangers from top artists ranging from Davido, Wizkid, Kizz Daniel, Olamide, Timaya, to the likes of Tiwa Savage, Yemi Alade, Sheyi Shay and many more.

These are top, internationally recognized musical artists. However, there best is usually in their collaborations. We have compiled for you a list of the latest trending collaborations featuring the best of Nigerian music artistes.

Nigerian famous dancehall musician, TImaya, just released the video of his new single, Bam Bam featuring Olamide. The music video, which was released on Friday, September 21, 2018, is no doubt the most trending collaboration at the moment. As at the time of writing this report, the official Bam Bam video on YouTube currently has 69000+ views (about 12 hours after its release) and counting. This figure is expected to have multiplied significantly by the end of the week.

Lil Kesh recently released the video of his latest hit, Flenjo, featuring the self acclaimed Port Harcourt first son, Duncan Mighty. Flenjo is one of the most trending musical collaborations dominating the airwaves at the moment. The official video of Flenjo currently has over 300,000 views on YouTube.

The Nigerian music goddess, Tiwa Savage, does not need any form introduction. She released her latest banger, featuring Duncan Mighty. This collaboration is definitely a bomb, as the unique voice of Duncan Mighty is aptly augmented by the flawless tone of Tiwa Savage. The collabo video, which was released last month, is still making waves and it currently has total views of over 4.5million on YouTube.

This banger was released last month by OBO himself, featuring the number one son of Port Harcourt, Duncan Mighty and fellow label mate, Perruzi. The official video of AZA on YouTube has total views in excess of one million and still counting.

Other notable mentions in include:

Up there is a compilation of five of the most recent, trending collaborations in the Nigerian music scene. Bam Bam tops our chart, as the latest trending release featuring two Nigerian music titans; Timaya and Olamide.

Another noteworthy observation is the sudden surge of Duncan Mighty back to the frontline of the Nigerian music scene. He is, evidently, the most featured artist in the past few months.