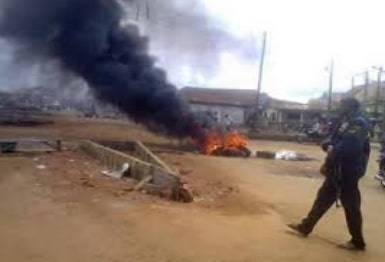 The kidnappers who struck at 11am on Wednesday, according to sources, are demanding a sum of N5million as ransom for their victim’s freedom.

70-year-old Ogunremi was said to be transporting eight passengers in his Suzuki mini bus popularly called ‘Akoto’, when the gunmen reportedly struck.

A bad portion of the road had forced vehicles to slow down, giving the gunmen  an opportunity to pounce on their victims.

The gunmen, who were said to be five in number, abducted three persons and allowed five others to go.

They were said to have abandoned the bus about five kilometers, and took their victims into a forest.

“What those who were in the bus told us was that, eight of them were in the bus around 11am. As they drove towards that route, five hefty men emerged from the bush and stopped the bus.

“We were told that they were on a bad portion of the road where driversd would have to slow down when these evil doers came out and started asking about the identities of those in the bus.

“After doing the screening, they only abducted three of them and allowed others to go untouched. They drove them in that bus for over five kilometers before they dropped the bus and entered into the bush and took them in another vehicle”.

“They have contacted the families of those abducted. What they demanded was N5 million ransom for the release of the trio.”

“They have only called once and they never called back since Thursday. We are still trying to establish contacts with them but that has not been successful.”

Police spokesman, Caleb Ikechukwu, said the report of the kidnap was yet to reach the state command at press time.

“I don’t think the family has reported this incident to the police, because we are yet to be briefed here at the command.”

“But I want to assure you that the police will swing into action and ensure their (victims) safe return as soon as we have truthful information about the incident”.