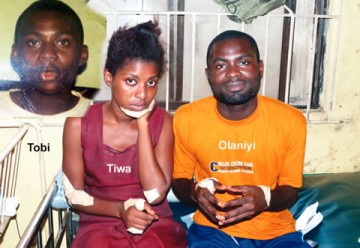 Tiwa Bankole, the singer who was allegedly stabbed by her landlord’s son, Tobi Obadina, has said she thought she was going to die.

According to her, Tobi constantly harasses tenants and gets away with it.

“When he was stabbing me, I started bleeding profusely and I thought I was going to die,” she said.

Bankole, who spoke with our correspondent on her hospital bed at Iyana-Ipaja, Lagos on Thursday, said she did nothing to warrant the attack.

“Tobi said no one could arrest him and nothing would happen to him. Because his father is a retired police officer and his stepmother, a policewoman, he always gets away with his misdeeds,” she said.

Bankole, who goes by the pseudonym, T Banks, described her assailant, Tobi, as a hot-tempered boy, who had on many occasions assaulted tenants at their 20 Yusuf Street home.

She said she had reported the 23-year-old boy to his father on many occasions but the landlord always ignored her.

She said, “I’ve been living in the house since 2005 with my brothers. Although the landlord lives in the same building with us, Tobi does not. He was one of my younger brothers’ friend and even used to come to our room. Some months ago, I wanted to use the toilet but Tobi blocked my way, threatening to beat me.

“The landlord told my dad that Tobi had not been to the house in three years and that I was lying. The landlord even insinuated that Tobi and I were having a relationship.

“There is no way I could have a relationship with Tobi because I’m about 10 years older than him. My father however advised me to stay away from the boy. I have been avoiding him but he continued to cause trouble in the neighbourhood,” Bankole said.

The singer said on the day she was brutally stabbed by Tobi, she was going to fetch water in the compound when he accosted her and started cursing her.

She said she ignored him but it seemed Tobi’s attitude further infuriated him.

Bankole alleged that Tobi followed her into her room where he stabbed her and her younger brother, Olaniyi, repeatedly.

She said, “Tobi insulted me, saying that he was going to get married soon while I am still a spinster at my age. He hit me in the back and an argument ensued. My younger brother however pulled me back into the house but Tobi continued to curse us. We cursed him also and this infuriated him.

“He poured a bucket of water into our room through the window and he later broke the louvres. He threatened to deal with us. In the evening, he barged into our room with a broken tumbler and said since we had refused to come out and face him, he would kill us.

PUNCH Metro learnt that another neighbour, Sola Ajayi, who intervened, was also stabbed in the process.

Tobi’s father, Ebenezer Obadina, however, dissociated himself from the incident.

He said he had warned his son to turn a new leaf and had done his best as a father.

According to him, he was sleeping when the incident occurred and did not even know that Tobi was on the premises.

“I am 76 years old and Tobi is my last child. I’ve been advising him to change his ways but he never listens. I had no hand in what happened and in fact, I was the one that got him arrested after the incident,” he said.

Tobi, it was learnt, is still being detained at Gowon Police Division.