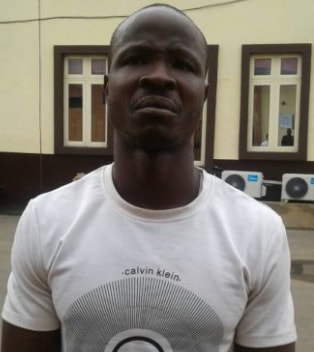 The task force Chairman, Olayinka Egbeyemi, a Superintendent of Police (SP), in a statement said the 35-year-old suspect, was arrested on Friday in Ikeja following complaint about his alleged illegal activities.

Egbeyemi said preliminary investigation showed that the suspect and his cohorts had been involved in the alleged illegal act for long. They, it was alleged, usually arrested pedestrians, who crossed express roads.

Egbeyemi warned the public to be wary of touts going around impersonating law enforcement officers.

Lagos State Commissioner of Police Imohimi Edgal, he said, has directed that the suspect be charged to court.

The agency enjoined the public to stop crossing the highways and use the pedestrian bridges for their safety.

Kojo, Egbeyemi said, had confessed to -illegally arresting pedestrians and extorting money from them with his fake identity card in the last six years.

“He confessed further that they were four as a group and that their routine operations cut across Ikeja, Berger, Oshodi, Ojota, Ojodu and Mile 2.”

“Kojo said he made an average of N8,000 to N10,000 per day from arrested pedestrians who preferred not to be prosecuted in court. He added that he makes more money in the morning when people are rushing to work and also in the evening when they are going back home as they rushed crossing express roads defying the pedestrian bridges. The suspect who claimed to be using his old Kick Against Indiscipline (KAI) identity card to defraud his victims, however, appealed to government to temper justice with mercy, that he is ready to be of good character and go back to his country if pardoned.”

Continue Reading
You may also like...
Related Topics:money, Nigerians, togolese