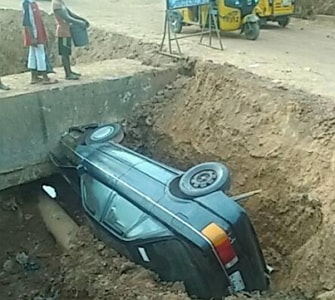 A source said the kidnappers were trailed from NNPC bus stop in Ejigbo to Shasha were there were arrested after their vehicle landed in a ditch.

Hear is what the source said:

“The gang has been giving us serious problems. They usually covered their number plates as though it is a VIP that was in the vehicle so that they would not be stopped by security operatives.

“We have been trailing them for some time and yesterday evening, we got information that they were somewhere around NNPC.

“Our men moved to the area and we identified a Lexus Sport Utility Vehicle (SUV) they were in. They followed the SUV from a comfortable distance but the suspects noticed they were being followed and they started speeding.

“Fortunately, their vehicle fell inside a ditch at Shasha and our men got them. We searched their vehicle and recovered assorted charms and other items concealed in a carton. They were taken to the police station at Shasha but would be moved to the command because they are dangerous criminals.”