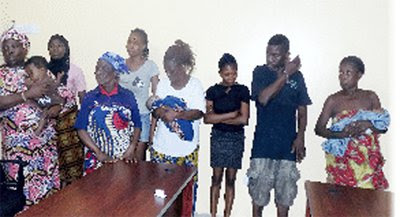 A Togolese birth attendant operating an illegal maternity clinic has been arrested in Ajah area of Lagos.

The suspect identified as Bankole Regina was picked up at Baboon Village in Ajele area of Ajah for running an illegal orphanage home.

After the expiration of the two week ultimatum given to operators of illegal homes and orphanages in Lagos State, the enforcement team of the State Ministry of Youth and Social Development yesterday arrested the  woman allegedly harbouring pregnant women illegally under the guise of operating a traditional birth maternity.

Agboola Dabiri , Commission for Youth and Social Development said the suspect was arrested alongside a pregnant woman, three babies and six other women.

She denied operating a home where children are sold. Dabiri said the ministry was tipped off that the suspect “keeps young girls and ladies for the purpose of producing babies who would be sold out.”

He added:”With the help of the police, we were able to apprehend the owner of the place identified as Bankole Regina, six other middle-aged women and three babies who were also rescued.

“As we speak, we have taken over the babies in one of our homes.The sick ones are being attended to in the hospital while the adults have been handed over to the police for further interrogation and likely prosecution.

“Illegal homes pose a great risk to our state.They breed prostitution and transmission of different diseases among others.”

The suspect said she had been operating the traditional birth maternity for over 30 years. She claimed that the babies rescued from her were abandoned by their mothers after delivery under the pretence of going home to take their delivery kits.

She said one of the three babies recovered from her place was her child and that the other two belonged to someone else kept in her custody.