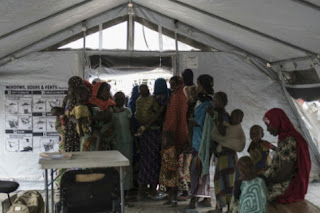 Some insurgents last night killed 4 United Nations aide workers sent to Rann community in Kala Balge LGA of Borno state to help the people displaced by the insurgents. All the victims are Nigerians.

A female aid worker was also missing while one other sustained injuries in the attack.

The Head of Communications, UNICEF Office for Coordination of Humanitarian Affairs (OCHA), Samantha Newport, said on Friday in Maiduguri, the Borno State capital, that two of the deceased were contractors of the UN client organisation, International Organisation of Migration (IOM), deployed to Rann as camp managers.

She added that others killed were a medical doctor working as consultant with UNICEF and an aid worker with International Committee of Red Cross (ICRC) affiliate organisation.

The UNICEF communications head said a female nurse was abducted, while another female aid worker was injured in the attack.

The insurgents struck at about 7:00 p.m. on Thursday, riding in gun trucks and motorcycles.

They attacked a military base and a displaced persons’ camp holding about 55,000 people.