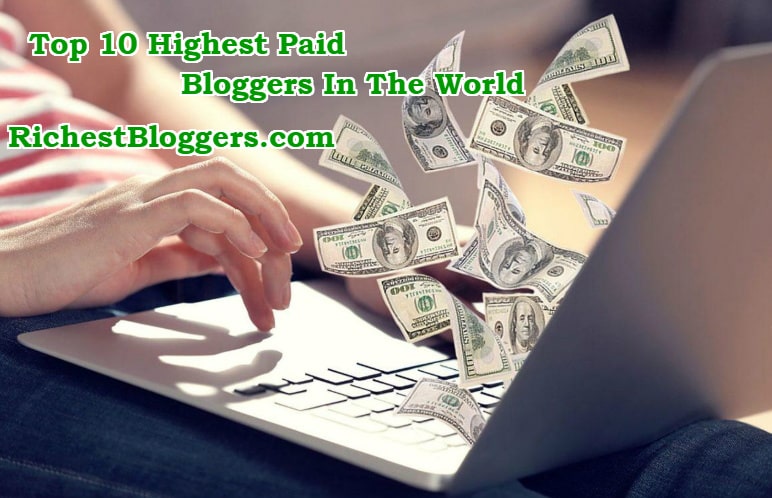 Today, almost everyone owns a smartphone, tablet, or computer.

In this internet age, we always look for information online to do almost anything.

This is where blogging comes in.

With so many people seeking for information online, bloggers have the opportunity to make cool cash easily.

As a blogger, there are always new ways to make money from your blog.

All that is needed is your utmost dedication, endurance, and creativity.

In this article, we will review the top ten highest paid bloggers in the world, and their secrets.

They are bloggers who are on top of their games.

These guys have taken blogging to the next level, and a few of them already earn 7-figures on a monthly basis.

With a blog, you can generate all the wealth you ever dreamt of.

All you need is the required knowledge.

Now in this article, we will show you the methods used by each of these bloggers.

These guys started normal just like other bloggers, but they worked continuously to generate traffic, so as to make their blogs successful, and they used the right methods to make money from them.

Now, without hesitation, let us analyse the top ten highest paid blogs/bloggers in the world.

Smashing magazine is a wonderful showpiece by Sven Lennartz and Vitaly Friedman.

This blog was created back in 2006, and it is now a major centre of contents for both web designers and web developers.

Smashing magazine publishes their contents in form of articles and ebooks.

They also serve as a job portal for developers and designers, that connects employees and employers.

Smashing magazine receives up to 5million viewers in each month.

With over one million followers on twitter, 295,000 fans on facebook, and over 250,000 subscribers, smashing magazine is currently one of the largest producers of all web development contents.

The huffingpost ranked smashing magazine as one of the best web development job portals in the world.

This is a library that contains numerous ebooks and videos on web design, coding, and more.

Smashing magazine won the .net awards for best blog of the year in 2008, and also won the Shorty Awards (Recognition) in 2010.

Sven and Vitaly generates about $400,000 on a monthly basis, from smashing magazine.

His blog “Perezhilton.com” currently receives about 6million visitors each month.

Now, with such huge traffic, Perez makes money from his blog through sponsored ads featured in his website.

Collis Ta’eed created this blog in 2006.

Tuts+ is currently a major producer of online tutorials and courses for the development of creative skills.

They also have a premium package in their subscription packages, and it costs $16.50 per month.

Envato tuts+ receives up to 5 million visitors per month, and with a huge subscriber base, they earn up to $900,000 every month, from subscriptions.

Brian created this blog back in 2006, and it is now one of the biggest content marketing hubs in the world today.

With over 16k followers on instagram, and over 45k followers on twitter, copyblogger accomodates about 1million visitors every month.

Having a huge subscriber base, Brian makes money from his blog (Copyblogger) through the sales of his marketing services and tools.

This generates about $1 million dollars monthly.

Martins Lewis is a blogger, and British financial journalist.

In 2013, he created a personal finance blog “Moneysavingexpert.com“.

This blog features numerous top quality contents on savings, and it also has some useful finance tools like credit card eligibility checker, mortgage calculator, and more.

Being a very useful personal finance blog that helps in cash management, this blog receives up to 30 million views each month.

Martin Lewis makes money from this blog through Affilliate marketing.

He generates income by recommending products to his visitors, and he gets a commission for every successful sale.

Through this, Martins makes about $1.5million dollars each month.

Now that is a huge sum!!

It is digital news blog that spreads across all niches.

Mashable was crowned one of the top 25 best blogs in the world.

In 2017, Ziff Daris bought Mashable from Pete Cashmore, for the whooping sum of $50million dollars.

Mashable receives over 25million visitors in a month, and they make over $2million dollars from paid ads each month.

This blog is a hub of world technology and science news.

They also carryout analysis on new tech-based startups, and more.

This deal was worth approximately $25million dollars.

With over 30million visitors a month, Techcrunch makes a whooping sum of about $2.5million dollars per month, and this comes mostly from sponsored banner ads.

If you move around the seo world, then “Moz” should not be a new name to you.

Moz is a completely functional blog created by Rand Fishkin.

It currently has the biggest seo community in the world.

It offers wonderful information on search engine optimization and other related stuffs.

Moz covers everything about search engine optimization, and they have one of the best subscription based keyword research tools today.

This blog targets the science and technology niche.

They generate about a whooping 75million visitors monthly, and make upto $350,000 per month through sponsored posts and ad placements.

This is a tech blog network that covers daily trends on consumer electronics and gadgets.

They currently operate over ten blogs, and they were recognized by the weekly American news magazine “Time”, as one of the best blogs in 2010.

With over 2million followers on twitter, over 320k followers on instagram, and over 1,5million likes on their facebook page, this blog generates about 47million world wide viewers each month.

With such a massive traffic, engadget generates about $4million dollars monthly.

They make this mainly from advertising.

The two blogs (Gizmodo and Engadget) generate up to $4.3milion dollars monthly.

It is a news and opinion website. It offers quality news in every niche, and lots more like sports, entertainment, news, business, science and technology, and more.

The following year (2008), Huffpost was graded as the most powerful blog in the world by the British magazine “The Observer”.

In 2009, Arianna Huffington (co-founder of huffpost) was recognized as one of the twelve most influential women in media by forbes.

In 2010, Huffpost won numerous awards and was also a winner of the People’s voice award by Webby Awards.

Over the years, Huffpost has won so many more awards not mentioned here.

Now that is massive…

You can imagine how these bloggers have established themselves in the world of blogging today.

Both professional, amateur, and aspiring bloggers look up to these guys for inspiration.

To be like them, you have to always possess patience, endurance, creativity, and consistency, and you have to possess love for what you do.

All you have to do is keep blogging.

For more information on how to grow your blog and make money, don’t forget to visit RichestBloggers.com.