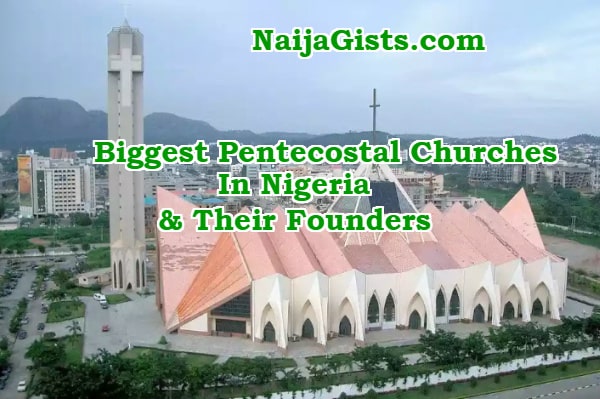 Nigeria is a nation largely populated by Christians from various denominations. Christianity is a religion which was adopted as a result of colonial influence in the 15th and 16th century. Christians are predominately located in the middle belt and southern regions of Nigeria.

This religion has come a long way since inception as Nigeria can boast of having quite a number of Bible believing churches and the largest Christian populace on the African continent.

Pentecostal movement was a Christian movement which began sometime in the 20th century among the Protestants. This movement was majorly aimed at Christians seeking to be baptized with the Holy Spirit, the working of miracles, having a personal encounter and relationship with God.

This movement was started with reference to the out pouring of the Holy Spirit upon the Disciples of Jesus Christ in the days of old and their subsequent remarkable acts.  These factors are what distinguish the Pentecostal movement; however they still believe in the Bible and obey its teachings.

Pentecostal Churches In Nigeria And Their Founders

It reportedly began in the year 1928 when he was called by God but was not officially founded until 1941. It was set up by Apostle Joseph Ayo Babalola; this church is termed as the first Pentecostal Church to be established in Nigeria. It currently has various branches within and out of Nigeria.

It is a popular church among the Yoruba people in the South Western region. Many pastors in Nigeria look up to Apostle Babalola; because of the kind of grace and power which he carried in his life time.

Due to the influence of Apostle Joseph Babalola and his teachings, many traditional worshippers were recorded to have been converted to the Christian religion. The Christ Apostolic church currently has a congregation of about one million people.

The Redeem Christian Church of God

One of the most widely known churches is the Redeem Christian church of God. It is presently being headed by Pastor Enoch Adeboye a man known for his humility and close walk with God; He was ordained in 1981. Prior to his ordination Pastor Adeboye was a lecturer at the University of Lagos where he taught Mathematics.

The Redeem Christian Church of God was founded in 1952 by Rev Josiah Akindayomi. Although born into a family of traditional worshippers this man of God was convinced of the call of God on his life.  He initially started this church as a house fellowship which held at Ebute- Meta in Lagos state and eventually moved to its permanent site where its head quarters is now located at Redemption way, Ebute-meta there in Lagos.

At inception, the church reportedly started with about 9 members but presently has over 5million members. The Redeem Christian Church has multiple branches all around the states and Local governments of the federation and also in 198 countries in the world.

This church was established by Moses Orimolade Tunolase in the year 1925. Churches like the Redeem Christian Church of God and Church of Aladura reportedly broke out of this church to form their own congregation.

It is a church known within and outside of Nigeria its founder was supposedly a man of miraculous birth and life. He is said to have received a call from God to work miracles and heal the sick. The church is said to have structured most of it teachings in accordance with the New Testament of the Bible. The church is also known for their belief in angels two of which they are named after.

It originated in 1931 and is currently headed by Apostle Sampson Igwe. It is termed as one of the biggest churches in Nigeria with a congregation of about 5 million people and a 100,000 capacity hall at their head quarters. It came out from the Apostolic Church. Its doctrines are rooted in accordance to the scriptures.

The head quarters is referred to as the National Temple and all the branches of the church gather here for a convention which happens twice a year. The church is located in almost every state of the Federation.

It was founded in 1983 by Bishop David Oyedepo in Ilesha, Osun state Nigeria. Its headquarters is called Canaan Land located in Ota, Ogun state and it is more or less a city of its own. It houses not just the church but schools, housing complexes and lodges. The vision for this ministry began in 1981 with an encounter Bishop Oyedepo had with God in which he was given an assignment hence, the establishment of the church in 1983.

The church acquired a massive portion of land in 1998 upon which its headquarters was built and completed in 1999. This church as at the time was said to have the largest seating capacity. In 2015 it began the expansion of its structure which after completion had a capacity of about 100,000. It has branches in all the states of Nigeria and also in about 65 countries of the world.

This ministry unofficially began in 1973 when Pastor Folorunso William Kumiyi a then lecturer of mathematics at the University of Lagos set up a Bible study Group. He went on with this ministry until it officially became a church in 1982 called the Deeper Life Bible Church.

He is still the general overseer of the church till date. It has branches in Nigeria, several African countries and other continents worldwide; its headquarters is in Lagos Nigeria.

Mountain Of Fire And Miracles Ministries

It was founder by Pastor Daniel Olukoya in 1989 with a gathering of a few people in D.K Olukoya’s sitting room. Its first official church service in its established headquarters was held on the 24th of April 1994.

This ministry is popularly known for miracles and conducting deliverances. It trains its congregation in the act of deliverance and spiritual war fare. D.K Olukoya is a strong believer in the teachings of Apostle Joseph Ayo Babalola of the Christ Apostolic Church. Mountain of Fire has its branches in every state in Nigeria.

This ministry was set up by Pastor Chris Oyakilome in 1987. It has its headquarters in Lagos Nigeria and daughter branches all over Nigeria and various countries of the world. It is famous for its devotional which touches several lives called the Rhapsody of Reality. It is said to have a congregation of over 400,000. The ministry has also been said to have produced several gospel music acts.

It was established in 1997 by David Ibiyeomie who presently still heads the ministry. Its headquarters is located in Port-Harcourt, Rivers state Nigeria and the church also kicked off in Port-Harcourt with about thirty-four (34) members. It currently runs several services on Sunday and has a congregation which runs into hundreds of thousands.

It was founded in 2002 by Lazarus Muoka. The church currently has about 300,000 other branches worldwide. It had its first service at a rented building in Lagos state where it headquarters is also presently located. The Lords Chosen church is said to have the capacity to seat about 30,000 people per service.

The First Pentecostal Church In Nigeria

The first Pentecostal church in Nigeria is said to be the Christ Apostolic church which was founded by Apostle Joseph Ayo Babalola in the early 20th century. He was a man of God known for his revival movements and intense relationship with God which was greatly reflected in his ministry and his teachings.

Apostle Joseph Babalola is often referred to as the father of Pentecostalism in Nigeria. His teaching and lifestyle is still very much referred to by several men of God today. This ministry has a private University called Joseph Ayo Babalola University in Osun State. It also has several primary and secondary schools around the country.