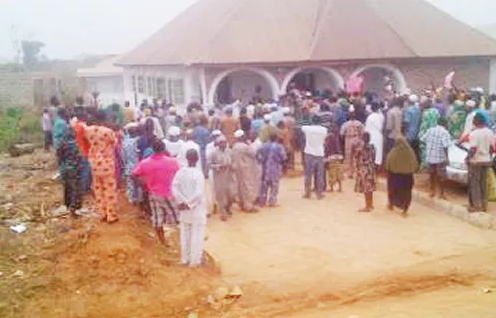 The Leader and adherents of three-in-one religion, Islamic, Christianity and traditional religions, at Kelebe community in Olorunda Local Government Area in Osogbo, Osun State, yesterday escaped being lynched by irate members of the community. The inhabitants of the community were protesting the practice which they described as ungodly.

The protesters asked them to relocate from the community. They said the worshipers’ acts and conducts were diabolical and suspicious. The residents poised for war against the sect members whose activities they claimed had created palpable fear in the minds of the people.

They threatened not to allow the sect members to continue with the practice which, according to them, is full of rituals and fetish acts. The protesters, who shunned Sunday service to ensure that the issue is addressed once and for all, gave names of the sect worship centre in the community as Toriqat Satia Organisation and Oju Ona Satia Worldwide Ministry.

He was captured by the protesters who were about to lynch him and set the worship centre ablaze before the intervention of policemen from Oke-Odo Police Division. However, some of the placards carried by the protesters had various inscriptions such as:

“Toriqat Satia Orgnisation is a ritual group and we don’t want them,” “We don’t want kidnappers and ritualists in Kelebe Community,” “All Zones in Kelebe Reject Oluwasatia Worldwide Ministry, they are dangerous people,” among others. The Chairman of Kelebe community, Alhaji Ismail Adeniyi, said the presence of the sect had brought fear to members of the community because their operations were strange to them.