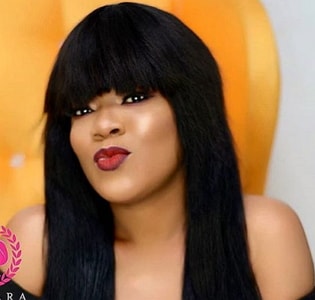 Were you paid for the role?

Yes. It was not as if I was trained to be an actress from the onset, but immediately after that experience, I saw as an opportunity to explore into acting. So, I went for further training under Aunty Bukky.

At what point did you relocate to Lagos in the pursuit of your career?

At some point, I felt it would be ideal for me to relocate to Lagos because that was the only option. Lagos is where the money is, especially with the fact that I was coming from a poor background, I realised that I had to leave for Lagos. That was and still is, the mainstream of acting. Being an upcoming act, you won’t have the opportunity to partake in movies if you are not available. Most of the time, the invitation is impromptu. If you are not available when called, another would take that chance. Sometimes you will only be called upon when a film production is going to come and pick up two or three scenes.

For a new entrant, how were you able to settle in the city?

It was not easy for me. I was with Aunty Bukky and later, with Aunty Opeyemi Ayeola. I stayed with my family friend at Fola Agoro, until I was able to pay for an apartment of my own.

How were you able to raise the rent?

I lived at Agoro for almost four years. The first apartment I was able to afford them was a room and parlour at Omole. Honestly, it was not easy getting the apartment, but I had to cut my cloth according to my size before I was able to save enough to do that. In fact, my elder siblings had to support me. That was when Big Sam provided me support beyond my expectations. He was always bailing me out of financial mess. That is why we are so close. People don’t know this.

All the while, were you tempted to give up your pursuit, or even offered your body?

As a Christian, I was conscious of what I was doing. My mum always advised us (her daughters) that our body is the temple of God and that we must not be involved in any act of sin.

Is your mother a preacher?

She is not just a pastor; she is a founder of churches under the Christ Apostolic Church (C.A.C). In fact, I play the drums in her churches.

You play a drum?

Yes. I am a good drummer. I am especially good on akuba and Konga. I still play them till now, but only in her church.

Back to how you got out of your poor financial situation…

After living in my apartment for about two years, I moved to another apartment in the same location. From this other apartment, things began to change for me. The roles started coming in. I always thank God for His divine intervention. It was not easy, but He made things easy for me at the end.

Do you ever have the feeling that you would also have made it if you stayed back in Ibadan?

I was born and raised in Ibadan and I knew I was still going to return home. As I said earlier, I came from a poor background. But, we never even let that bother us because we believed God would move. We were contented with what we had. Though we were financially poor, we were not spiritually and mentally lacking. Then, I didn’t know we were poor because we still had something to eat. I remember we usually ate particular beans called feregede (African yam bean). Anybody that is familiar with this kind of food will have an idea of the stress one goes through before it is cooked. My parents will ask us to fast when there was nothing to eat at home. At that point, I had to move to Lagos, where there were better opportunities in the entertainment industry.

When would you say you actually got your breakthrough in the industry?

That definitely was last year. I am not saying that I have not been making money, but I made more money beyond my imagination last year. A large part of that fortune is from Lagos, though Ibadan is always my home. I feel at home whenever I am in Ibadan. It is my country home that I love to visit a lot. This is why I love to do anything that will be beneficial for the people of Ibadan. God is the pillar of my career, but Ibadan people have been my largest fans. They have been extremely supportive.

How are you repaying them for their loyalty?

I have several empowerment initiatives, especially in vocational skills. I still have a lot of plans for my fans generally waiting in the pipeline.

Did you have any formula you applied in having your break?

Initially, I was doing my thing the usual way; I didn’t have a management team or any team for that matter. You know, sometimes you make mistakes, especially when you feel you are on top of your game. Being popular doesn’t mean you are successful. I made my mistakes, especially the mistake of believing that I could do all things by myself because I was popular. It doesn’t work like that. We need to delegate power and form strategic alliances with some experts. I can confidently tell you that it has been a different ball game since I had a team. Their experiences have been awesome.

What is the next thing for you after your recent production, Seven & Half Dates?

It wasn’t my production. I was only asked to participate. For me, I just finished auditioning for another movie. After that, I will travel to Benin Republic to appear in another movie by a friend. I am presently making plans to commence my soap opera. As for movies, I really want to slow down a little bit. I want to build my home to an acceptable level and also concentrate on my soapie I am planning to raise lots of up-and-coming actors and actresses.

Could you shed light on the home you intend to build?

I have a man I am engaged to and I don’t want to give him out for now. I want to concentrate and build my home first.

An OAP said your post on social media that you had been engaged to an unidentified individual was a ruse and that there is no one in your life.

Male or female OAP? Before you answer though, I am guessing it would be a lady.

You are right. Why did you expect it to be a woman?

Don’t believe that anyone who smiles, laughs with you mean well. Let’s leave it at that. But then, I have had news about my marital life and I don’t care about any hearsay. People are entitled to their opinions; which, unfortunately for the lady, is not true and has nothing to do with me. People know that I am always real and that I don’t have any reason to lie about my life. It is my life. Even if I decide not to get married again, whose business is it? I know their trick. They are just trying to know the man in my life now.

You have been accused of adapting others’ work for your own production. How will you react to this?

That cannot be true. I hardly watch American movies. I only watch Nigerian movies, especially Yoruba, Igbo, Ghanaian and Indian movies. I can remake some of the works of these movies because it is professionally accepted. In fact, I have seen a Ghanaian movie that was a clear remix of Alakada and I did nothing about it. It is not as if I am supporting copyright infringement. Personally, I don’t do such; I always call or follow due process before I use people’s work.

What is your take on the claim by your ex-boyfriend that you guys have settled?

Someone drew my attention to the report, but I made the person realise that I am not interested. He has moved on and so have I. When I am ready to marry, you will be invited. I will also find out that OAP, who said I was lying and gladly invite her too.