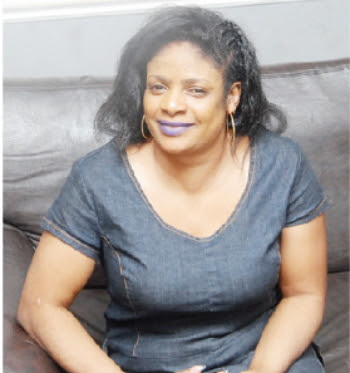 It was thanksgiving time at the home of Mr. Steve Nwosu, the Deputy Managing Director of The Sun Piblishing Limited as family, friends and well-wishers kept trooping to his house at Amuwo Odofin to celebrate with him over the return of his wife Toyin who was abducted last Monday by unknown gunmen.

The gunmen, who were said to have earlier raided several houses in the neigh­bourhood, gained entrance into Mr Nwosu’s apartment by pulling down the burglary proof on one of the windows.

Not satisfied with what they got, the gun­men decided to take Mrs Nwosu into their waiting boat and disappeared through the canal directly facing the community.

Home at last but still recovering in an undisclosed location in Lagos, Mrs. Toyin Nwosu was seen surrounded by her chil­dren, her excited mother and some immedi­ate members of her family. They were obvi­ously grateful to God for the safe return of their daughter.

Not left out in the excitement were her kids who are yet to understand why the gunmen took her away. They grabbed their mother, insisting that she should play with them.

Laughing out loud but still visibly shak­en by the horrible experience, Mrs. Nwosu in an interview with Saturday Sun corre­spondents, said: “I thank God for my life and I believe that no amount of threat will stop me from doing good.” 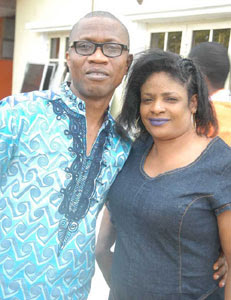 “We were woken up by the banging on the window and before my husband could make a distress call, they were already in the house. They ransacked the whole house and took all the valuables on sight. I was hoping that at the end of the raid, they would go, but I got the shock of my life when they ordered me to follow them. When I realised that they were about to kidnap me, I quickly took an extra wrap­per and tied it around my waist. The entire plea by my husband and I fell on deaf ears as they bundled me out, tied my hands and dragged me into their boat.”

“It was very dark, maybe that was why they did not blindfold me. We drove for about 30 min­utes till we got to their camp which is in a thick forest. We walked into the bush for several minutes till we got to a point where they stopped. They assured me that if I cooperate with them, that no harm will come my way. They also asked me to pray to God that my husband will pay my ransom and on time. It was in that jungle that I spent four days and three nights.”

“I tried to find out why they chose to kidnap me and they said that someone paid for my life. They insisted that they were hired to kill me but will spare my life if my husband will pay good money.

I also learnt that some persons in the community conspired against our family. I cannot confirm who or why but the truth is that no amount of threat will stop me from doing what I know how to do best, which is helping people. I will continue to do good.”

“They asked me to eat and I refused. They promised to give me any kind of food that I wanted and I told them that all I wanted was to go home. Anytime the leader of the gang came around, he would be begging me to name whatever I wanted. I do not know why they were so kind to me. I guess they were kind because they were expecting money but I thank God for taking over their evil mind. I give God the glory that I came out of that place alive. They did not beat me. The only time I got a blow from them was when I tried to defend my son. He is a big boy and those boys were in­timidated by his size, so when they wanted to slap him, I blocked them and the hot slap landed on my face.”

“No other new person came to that forest. I was always in company of one person while some of them will go out and come back. As soon as they return, they will give me update on whether my husband had paid the ransom or not.

“I kept begging them to help me by re­leasing me to my family. I told them that my husband does not have money but a bloody journalist. They said that they have been monitoring the area and that policemen were in our house. They also said that a lot of rich people were visiting the house which means that we are very rich. I told them that my husband is a good man, which is why a lot of people love to identify with him. It was possible that those persons only came to console him because of what happened.

“The younger man, who was always with me, kept assuring me that nothing will hap­pen to me. The one that was communicating with my husband called me and begged me to eat that he learnt that I have refused to eat. It was in the process of begging me that he said that I will be going home on Thurs­day. I was still scared but I prayed to God that it could be true that I was going home.”

“On Wednes­day night, I became restless and kept re­minding them of their promise to take me home. They told me to hold on that they did not want to bring me out during the day­time. When it was very dark, we boarded a boat and they dropped me off at FESTAC new bridge at about 2.15am on Thursday.

“They also gave me a phone and asked me to call my husband to come and pick me. I do not know why they treated me that way but I strongly believe that that it was God who chose to answer our prayers. It was God that made them treat me nicely but no matter how nice they may be, a criminal will always be a criminal. It was God that took over the situation while I was in captivity.” All through the interview session, Mrs. Nwosu smiled and kept thanking God for His mercies.

“The trauma was much but I thank God for His mercies. Today (Thurs­day) is my mother’s 69th birthday anniver­sary and you can imagine how happy she is. What other gift can a mother ask from God but the safe return of her daughter? “I thank God and every other person that prayed and supported my family while I was in the lion’s den. I am grateful to the president of our great country, Muham­madu Buhari, the governor of Lagos State, Akinwunmi Ambode, the former governor of Abia State and publisher of The Sun newspapers, Dr Orji Uzor Kalu, my col­leagues from Amuwo Odofin Local Gov­ernment Area, my professional colleagues from NIPR, The Sun staff and all the media houses who gave enormous coverage which I believe played a major role in softening the hearts of my abductors.

“Irrespective of what happened, I will keep doing good. I believe that the good that I did and will still do in the future will get me to a higher place. I wish to encourage Nigerians that they should not be discour­aged by the possibility that some persons who they assisted in the past will repay them with evil. It is God that will repay us.”

Continue Reading
You may also like...
Related Topics:kidnappers, toyin nwosu