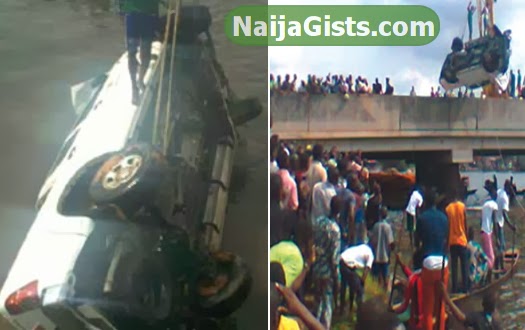 A fatal motor accident involving a speeding Toyota jeep that fell off Ikota Bridge in Ajah, Lagos this morning has claimed the lives of a father and his daughter.

According to LASEMA (Lagos State Emergency Management Agency), the speeding vehicle conveying a family of three on the popular bridge in Lagos somersaulted severally before plunging into the lagoon around 1 am on Tuesday morning.

LASEMA GM, Mr Femi Oke Osanyintolu who confirmed the accident this morning said the wife of the driver was thrown out by the vehicle while somersaulting.

The driver of the Toyota Jeep and his daughter reportedly drowned in the Lagoon. 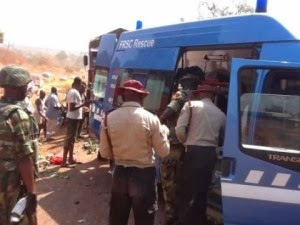 The woman has been taken to an undisclosed hospital while the bodies of her late husband and daughter have been transferred to a local mortuary.

This is what LASEMA General Manager told journalists today in Lagos today:

“We have recovered the dead bodies and have transferred them to the appropriate quarters for the necessary actions.

“The woman, rescued at the scene by emergency officials, has been taken to a hospital for treatment.

“Search for the vehicle, an ash Toyota jeep, is still ongoing. We are doing everything to get it out of the lagoon,’’ he said.

Timaya Praises Girlfriend, Baby Mama On Instagram
Success Guidelines For 2014: How To Live Your Life To The Fullest