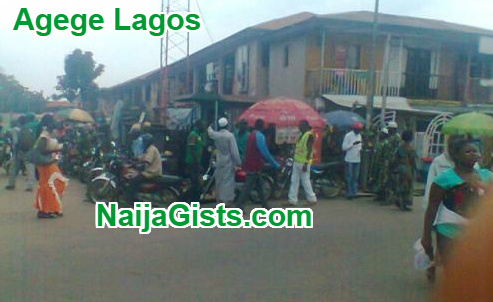 The Police in Lagos State, have arrested a man, who claimed to be a trader, for allegedly raping his 15-year-old daughter and administering drugs on her to prevent pregnancy.

The spokesperson of the state Police Command, SP Dolapo Badmos, confirmed the arrest to NAN today.

Badmos said that the Gender Unit of the command was investigating the suspect, Uchena Elumadu for a case of defilement.

She said that a neighbour, who resides at Martins Street, new Oko Oba, Agege Lagos, reported the case to the police.

She said that preliminary investigation revealed that the suspect had on different occasions, raped the JSS 3 student who is his daughter.

The police image maker said that Elumadu usually administer drugs to prevent his victim from getting pregnant after having intercourse with her.

“The victim said that her father, on countless occasions wakes her up in the middle of the night to rape her, mostly when her mother is on night duty.
“The mother is a casual worker in one of the outfits attached to airport.

“On the night of Sept. 19, the mother discovered the suspect having intercourse with the victim and raised the alarm and one of their neighbours reported the case to the police,” Badmos said.

She said the victim had been admitted at the Police Cottage Hospital, Ikeja Police College, where she is receiving treatment in partnership with Mirabel Centre LASUTH.

The spokesperson said that medical examination was being carried out on the victim.

Chaos As Mad Man Kills 1, Injures 3 In Jigawa
4 Men Who Diverted 5 Trucks Of Rice Meant For IDPs Arrested In Katsina