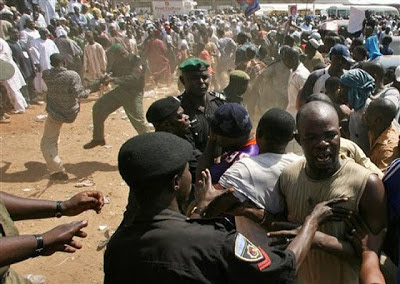 A man suspected to be mentally ill has stabbed a man to death and injured three others in Taraya Village of Jahun Local Government Area of Jigawa.

A resident of the village, Adamu Sani, told newsmen that the suspect was armed with knife which he used in perpetuating the act at about 1am on Saturday.

Sani said that the suspected killer attacked the victims in their homes located in different parts of the village and fled.

The Secretary of the Local Government, Alhaji Mohammed Harbo, told newsmen that the assailant stabbed his first victim, Adamu Jibrin, on the nape which led to his death.

Harbo disclosed that the suspect stabbed his second victim, Sale Umar, in the stomach while the two others – Auwal Sani and Yusuf Suleman – were stabbed on the shoulder and ribs, respectively.

He said that that the three injured persons were on admission at the General Hospital in Jahun.

Continue Reading
You may also like...
Related Topics:jigawa, mad man