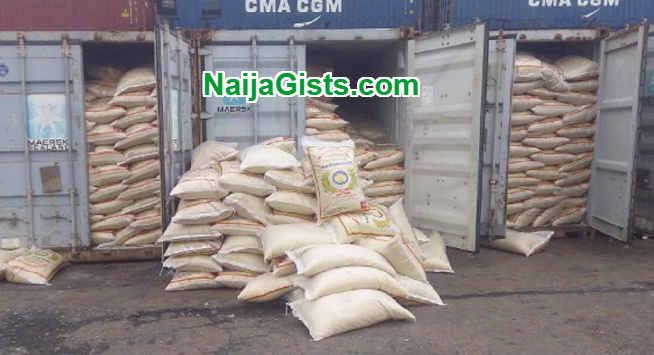 September 24, 2016 – 4 Men Who Diverted 5 Trucks Of Rice Meant For IDPs Arrested In Katsina

The Police Public Relations Officer (PPRO) in the state, DSP Salisu Agaisa, told newsmen in Katsina that the suspects had claimed to be customs agents.

It would be recalled that the Federal Government had directed the Nigeria Customs Service (NCS) to distribute rice it seized from smugglers to the various IDPs camps.

The police spokesman said the suspects were arrested after they offered to sell the commodity to one of the prominent persons in the state.

“One of the suspects had called the prominent person through a mobile phone that they have five trucks of the diverted rice for sale.
“Our investigation also shows that the suspects had concluded arrangement to sell a bag of rice to that person at the rate of N12,500 per bag,’’ he said.

Agaisa said the suspects were later arrested at Liyafa Palace Hotel in Katsina where they had lodged for 21 days.

He said the suspects would be prosecuted after investigations were completed

Continue Reading
You may also like...
Related Topics:idps rice, katsina