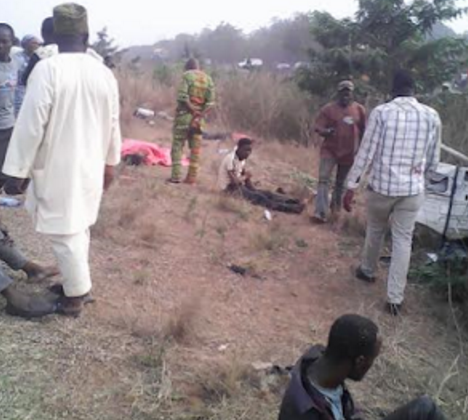 At least 8 people died in an accident involving a car and a jeep on Hadejia-Kano road in Kaugama Local Government Area of Jigawa.

Mr Adamu Abdullahi, the spokesman of the Nigeria Security and Civil Defence Corps in the state, said the accident occurred on Sunday evening.

“Our men were returning from Hadejia when the accidents happened and they assisted in rescuing survivors and taking those who died on the spot to a nearby hospital,’’ Abdullahi said.

An eye witness, who gave his name Alhaji Salisu Sani, disclosed that the accident occurred when an articulated vehicle took wrong overtaking that resulted in collision by the two vehicles.

Jigawa Sector Commander of Federal Road Safety Commission Angus Ibezim confirmed the incident, saying: “We received a report about it and we are not happy about it.’’

He advised motorists to desist from speeding under whatever circumstances.