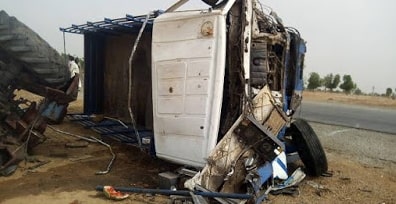 The accident reportedly occurred at 11:40 p.m, causing a heavy traffic gridlock on road for several hours.

A trailer from Iwo Road, suspected to have had a brake failure, rammed into a commercial bus and two cars near the entrance to a market in the area.

While police spokesman Adekunle Ajisebutu, a Superintendent of Police (SP), put the casualty figure at 11, a report by the office of the Sector Commander of the Federal Road Safety Corps (FRSC), Mrs Cecilia Alao, said 12 persons died in the accident.

It said the bodies of the victims were deposited at the morgue of Oyo State Specialist Hospital at Adeoyo, Ibadan.

The report added that besides nine persons who died immediately on the scene, three others died yesterday among the injured 10 victims conveyed to Toun Specialist Hospital on Iwo Road for treatment.

An eyewitness Waris Olatunde said a bus belonging to his boss, named: Orobo Baba Welder, had loaded passengers and was about to take off when a trailer from Ife heading to Iwo Road crossed the road and rammed into two other vehicles.

Olatunde, who claimed to be the conductor of the bus that was crushed, also said he escaped death by the whiskers.

“It was only God that saved me. Usually, I used to collect the fare for the driver before leaving the park. But in this case, he said since it was late, I should take N200 and leave.

“He told me that he would collect the money himself on the road. The man just closed the side door of the vehicle and, before he entered from the driver’s side, the trailer crossed to his side and killed everyone in the vehicle. A Toyota Camry and Nissan Micra cars were also crushed.”

“Report of the crash was received at 11.56 p.m and a detachment of FRSC standby rescue team was sent within 11 minutes of receiving the information.

“Nineteen persons were involved in the crash; they consist of 10 male adults, eight female adults and one male child.

“Preliminary investigation suggests that brake failure resulting in loss of control is the causative factor of the road crash.

“Meanwhile, the road obstruction caused by the multiple crash was duly cleared by FRSC personnel at 2.14 a.m on January 1, thereby ensuring sustenance of smooth traffic flow.

“Whilst it is crucial to commiserate with the families of the deceased and wish the injured quick recovery, it is imperative to state that effective maintenance of vehicle components and general adherence to safety rules is strongly recommended to forestall a recurrence of the unfortunate incident.”