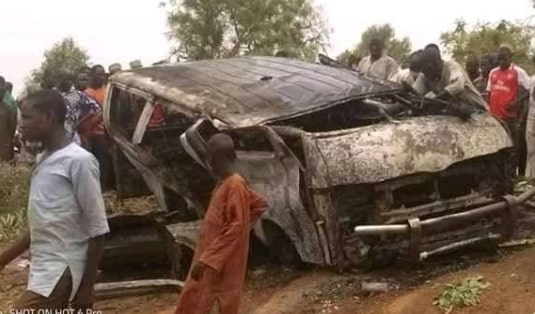 19 Burn To Ashes In Gory Bus Accident In Jigawa

At least 19 people were burnt to death in a ghastly motor accident that occurred yesterday at Gwaram local government area of Jigawa State.

The unfortunate incident happened when a bus with registration number KTG 245 YG conveying passengers from Tsangayar Ragwam in Katagum local government to Gadar Maiwa all in Bauchi local government suddenly had a tyre burst in Gwaram area of Jigawa State.

According to an eyewitness, when the tyre burst, the driver of the bus lost control and ran into the bush where the bus somersaulted and went up in flames. Efforts by fire service and other good Samaritans to put off the fire and rescue the passengers failed as the fire engulfed the bus completely.

It was further gathered that the passengers were said on their way to attend a wedding ceremony in Gadar Maiwa town when they met with their untimely death.

The victims included men, women and children who were burnt beyond recognition in the accident.

Residents of the area revealed that some people who were rescued before the bus caught fire were taken to Gwaram General Hospital.

Continue Reading
You may also like...
Related Topics:jigawa, news, state