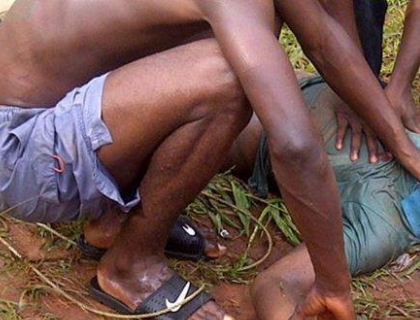 Tragedy struck in Abakaliki, Ebonyi State Wednesday when the body of a fifteen year old school boy simply identified as Tony who drowned at a dam near the International Market Abakaliki where he went to swim with his school mates was recovered.

His body was recovered by security guards and a diver.

It took the combined effort of divers and security guards in the market to recover the body of the boy three days after unsuccessful attempts.

Tony, a JSS 3 student lived with his foster parents at 19 Nwoji Avenue, off Ogbaga road Abakaliki.

He was said to have left his school in company of other students who were asked to go home for not paying school fees.

It was on their way home that the students entered the International market to swim in the dam which was constructed by the company handling the market project.

The disappearance of the boy shortly after jumping into the water led to his mates alerting security guards in the area who contacted the police.

Narrating the incident, the foster parent, Mrs. Silvia Ede explained that she was informed about the tragedy by one of her relatives.

She said the victim had no reason to leave school at the time he did as she had provided him with all the necessary requirements.

Another family member of the victim, Mrs. Josephine Eze said that it was after policemen and Fire fighters drafted to the scene failed to recover the body that they resorted to divers.

Expressing their feelings over the incident, some residents of the area called on the state government to close the dam or put a fence round it to forestall a recurrence.

The Diver, Mallam Mohammed Belo however said recovering the body would not have been possible if not for some rituals which he carried out.