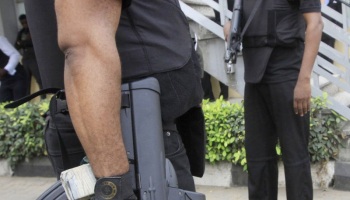 Policemen attached to Umuoba Police Station in Isiala Ngwa LGA of Abia, on Monday foiled an attempt by two men to steal a child in Amaede, a village under the station’s jurisdiction.

NAN learnt that the armed men entered the house of their victim to steal the boy, but met stiff opposition from his parents, which resulted in a scuffle.

A source close to the village told NAN that in their attempt to drag the boy from his parents, the suspects shot and macheted the mother, Mrs Glory Nweze.

NAN learnt that the hoodlums fled the scene as soon as they learnt that the police were in the neighbourhood and left behind one locally made double barrel gun and one machete.

Onyeke said the boy’s mother was responding to treatment in an undisclosed hospital.
He said that one of the gang members was identified as Azunna from the neigbouring Umuokoro village.

He said that the house of the suspect was raided and two locally made single barrel guns, one live and two expended cartridges, one iron rod and a portrait were recovered.

The Police spokesman appealed to members of the public to provide useful information on the whereabouts of the suspects who were still at large.