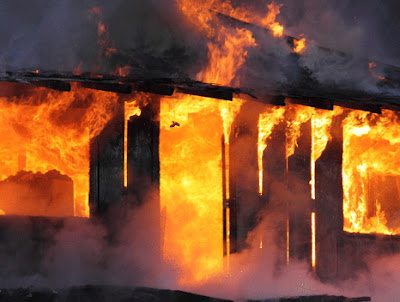 A baby was among the 5 people roasted alive on Sunday when a suspected mad man simply identified as Monday set his family house on fire.

The incident which happened at Budo Alaka village in Kisi area of Oriire LGA of Oyo state around 2:35am yesterday killed 6 including an 8-month-old baby.

An eyewitness said the suspect requested for money to travel to an undisclosed location on Saturday the 18th of February but his request was turned down.

Angered by this, the lunatics returned in the early hour of yesterday to set the thatch house ablaze when the occupants were asleep.

The suspect reportedly escaped from the scene afterwards, but was later arrested by the police. Upon interrogation, he confessed to the crime, but claimed he did not know what came over him.