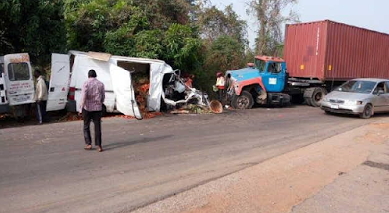 Not less than 19 people including five children died in an accident at Ogoneki in Edo, off Asaba-Benin Expressway on Thursday, the Federal Road Safety Corps ( FRSC ) has said.

Mr Samuel Odukoya, the State Sector Commander, told NANA in Benin City that the accident which involved a trailer and a passenger bus occurred at 4.30 p.m. on Thursday.

He said 24 persons were trapped in the accident involving a trailer with registration no. DRZ 374 XA and a Toyota bus marked ABD 206 XA.

Odukoya said 16 people died on Thursday while three other persons died in a hospital on Friday.

According to him, five others sustained various degrees of injury.

“The trip was from Benin to Auchi and the cause of the accident was attributed to dangerous overtaking.

“Three females, 11 males, a female child and four male children were killed in the accident, while five men were injured and have been taken to the hospital,” the commander said.