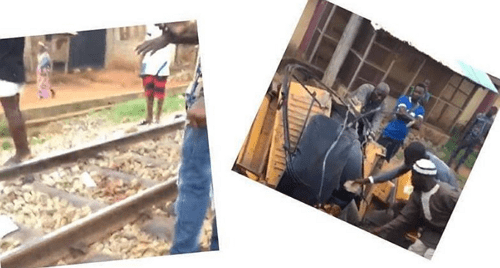 3 men and a women were on Tuesday killed when an Abule Egba-bound train crushed a tricycle at Iju Ishaga, a Lagos suburb.

It was learnt that the tricycle, with four passengers and the driver, had attempted to quickly cross the rail at Oke Aro when it got trapped around 6.45am.

It was learnt that motorists and passersby stopped when they sighted the train from afar, but the tricyclist thought he could pass before the train got close.

According to The Nation, one of the occupant escaped unhurt. The remains of the deceased littered the scene.

The agency, he said, received a distress call around 6:52am and activated its emergency response team.

“On arrival on the scene, it was gathered that a tricycle with five people inside, had a collision with a moving train.

“We learnt that the accident was caused by the tricyclist’s recklessness, as he attempted to cross the rail while a train was coming.

“The bodies were recovered and handed over to SEHMU, to be moved to the mortuary. Motorists and tricyclists are advised to be patient when crossing the rail, to avoid loss of lives.”