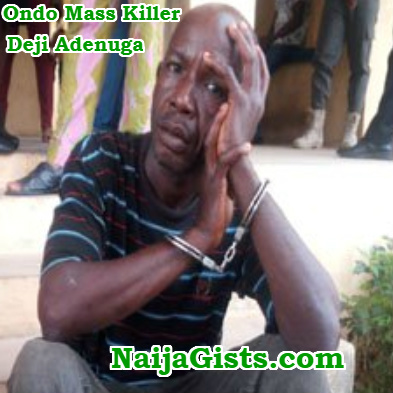 Police in Ondo state yesterday paraded ex convict and arsonist, Deji Adenuga who allegedly killed 8 members of a family in Okitipupa after his wife aborted 4-month pregnancy and moved out of his house.

The 45-year-old who escaped from Olokuta Prison in Akure after a jailbreak in 2013 is now back to where he belongs.

The offence sent him to jail from where he escaped 10 years later.

Here is what the indigene of Erinje in Okitipupa LGA of Ondo state said yesterday:

“I have no regret killing them because when they did their own, nobody punished them.

“I set their house ablaze when it became clear that my wife had moved to her parents’ house with some of my belongings. We had a little disagreement at home and she moved out.

“I was the one paying their rent. I was also responsible for their day-to-day living. I am a palm wine tapper and I always live up to expectation at home and in my in-law’s house. M

My wife’s parents always ask for money from me and foodstuffs and I usually oblige.”

Adenuga said he waited for months, thinking the family would rescind their decision, to no avail.

“I also reported the matter to the police, but they did not take action.”

He was arrested last week in Ijebu Ode where he relocated to after the criminal act.