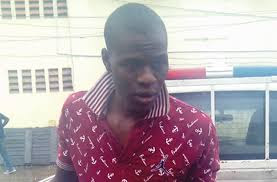 A 41-year-old suspected fraudster has been arrested after he attempted to collect N3 million ransom from a pharmacist in Lagos State, western Nigeria.

Fabian Obi allegedly sent text message to a pharmacist, Ayogu Igwebuike and his wife demanding N3 million with threat to deal with his family.

The incident happened between November and December 2015 at Kamoru Street, Ejigbo where Igwebuike resides with his family.

According to the police, Obi allegedly with intent to steal, did demand from Ayogu Igwebuike with menace on phone with number 09084483118 the sum of N3 million or else he would deal with his family.

We gathered that when the threat became so intense, Igwebuike went to Ejigbo police division and reported the matter.

The police reportedly advised Igwebuike to play along with him and demanded an account number where the money will paid into.

Obi, who is from Isiala Mbano in Imo State, sent Igwebuike a Diamond Bank account number 0022262157 belonging to his girlfriend identified as Juliet.

Igwebuike paid N10,000 and asked Obi to go to the bank and cash the money and promised to pay more money to the account as directed by Obi.

It was when Juliet and Obi went to the bank to cash the money that Obi was arrested and taken to the station.
At the station, he confessed that Juliet did not know that it was ransom money and pleaded that she should be allowed to go.

He admitted that he was the person that sent the threat message and he did so to raise some money to start a business.
Obi was charged to court with stealing and threat with menace under the Criminal Code.

He pleaded not guilty and the presiding Magistrate, Mrs J. O. E. granted Obi bail in the sum of N100,000 with two sureties who must own a land property.

Obi was remanded in prison custody pending when he will perfect his bail.
The matter was further adjourned till 29 February, 2016.