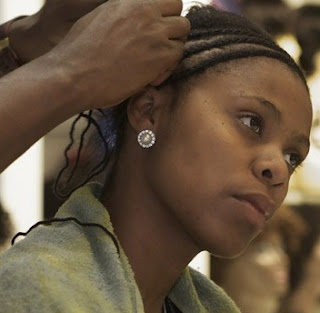 Ibukun Pius, a 30-year-old hairdresser who allegedly knocked off her neighbour’s tooth, on Monday, appeared before an Ikeja Magistrates’ Court in Lagos.

Pius was charged with assault, breach of the peace and causing grievous harm, before Magistrate J.A Adigun.

The accused, who resides at Aboru, Iyana-Ipaja, Lagos, however, pleaded not guilty to the charges, and was granted bail in the sum of N50, 000 with two sureties in like sum.

The magistrate ruled that the sureties should be gainfully employed and show evidence of two years’ tax payment to the Lagos State Government.

Earlier, the prosecutor, Sgt. Godwin Awase, said the accused knocked off the tooth of Mrs. Grace Obot following a misunderstanding on October 30 at their residence.

Awase added that Pius beat up Obot and conducted herself in a manner likely to breach the peace.

“The accused assaulted the complainant by punching her all over the body. She removed one of her teeth and left three others shaking.

“The complainant was coming from their bathroom while the accused was washing clothes at the entrance.

“She (complainant) pleaded with the accused to move her washing items so that she could enter her room.

“The accused refused and an argument ensued between the two which resulted in the assault.”

Awase said the offences contravened Sections 168, 171, and 245 of the Criminal Law of Lagos State, 2015 (revised) and punishable under same.

The case has been adjourned till January 3, 2018 for hearing

Continue Reading
You may also like...
Related Topics:beat up, co tenant, Hairdresser