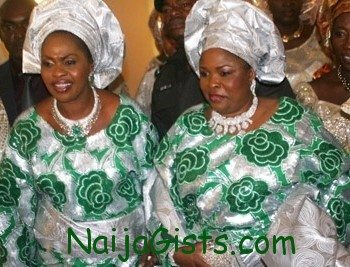 “We have warned the First Lady to be weary of her”…Friends & Family cry out. Just like the way Hajia Bola Shagaya and Senator Daisy Danjuma advised the late Stella Obasanjo to go for tummy tuck many years ago, Hajia Bola who is fondly called ‘AGIP’ {All Government In Power}, we gathered was the one who advised Dame Patience Goodluck Jonathan to go for Cosmetic surgery.
naijagists.com

According to the source, “The First Lady came down with food poisoning in Dubai where she had gone on a secret mission to explore undergoing some procedure”. “The nature of the procedure remains a mystery, but a source at the Presidency said he knew that Mrs. Jonathan close friend, Bola Shagaya, had been persuading her to see a Lebanon-based cosmetic surgeon”. The source added that the First Lady was interested in enhancing her looks.

Also, a source in Abuja said she suspected that Mrs. Jonathan might have undergone a procedure in Dubai from which she got an infection. Some of the First Lady’s friends confided in us that they have warned her to be very careful with Hajia Bola Shagaya because of her past records of betraying her friends.
.
In Nigeria today, one woman whose image looms large within the society is Hajia Bola Shagaya, the popular businesswoman and billionaire. This is because she is regarded as the most powerful woman within the corridors of power. Hajia Bola earns this title because she is regarded as the closest person to the wife of the President, Dame Patience Jonathan. Although, the two women have been close for many years, there is so much fear that their friendship may not stand the test of time.

And this has given rise to the speculations flying around that Patience may be forced to dumb Hajia Bola before she is led astray. Moreover, some concerned family friends of the President are working on getting Jonathan to warn his wife to steer clear of Hajia Shagaya be severing her relationship with her. The concern is borne out of the fear that Hajia Shagaya lacks any sense of loyalty when it comes to the issue of friendship. And this group of family friends cited manyinstances to buttress their argument.

According to the story going around, Hajia Shagaya is in the habit of romancing any government that rules at anytime. She patronises people within the corridor of power and solicits for contracts and other patronages. This habits dates back to the late 80’s, during the time former President Ibrahim Babangida presided over the affairs of the country. It was gathered that Bola Shagaya enjoyed a very close friendship with the Babangida family. She was so close to the family that she had unhindered access to them, especially to late Hajia Maryam.

Not only that, Hajia Bola also engaged in several business deals, on behalf of the family. Her son, Sherrif and Aminu Babangida who were once best of friends ran a joint oil servicing company in Abuja. But the moment Maryam took ill, Bola Shagaya drifted away from the family. Some sources claimed that the Babangida children had accused the Ilorin born lady of spreading the news of their mother’s illness and other incidents that were happening in the family during that period.

The Babangida children were so angry with Bola Shagaya that they stayed away from her 50th birthday. However, their father, who was in Abuja for a social function attended the event and stayed for just 30 minutes.
But after Maryam died in December 2009, Hajia Shagaya practically moved into the Babangida family home in Minna and mourned with the family for the first few days.

But hardly had the 40 days mourning period ended than she began to attend parties again. The strain in the relationship between Hajia Bola and the Babangida became more noticeable when her first son, Sherrif got married last year. But for Aminu and Halima, who were in the couple’s train, other members of the Babangida family stayed away from the wedding. One of the worst hit of Hajia Shagaya’s act of betrayal to the Babangida family is Aishat Shinkafi, the first child of IBB and Maryam. She is still dazed by the fact that Hajia Shagaya could turn around and treat her family with disdain, considering the huge resources her parents invested into her life.

Aside from the Babangidas, the family of the late Stella Obasanjo is reported to be holding grudge against Bola Shagaya. It was gathered that the businesswoman was very close to Stella and acted as fronts for her in most of their business dealings. Moreover, Shagaya was always in Stella Obasanjo’s entourage and she junketed the globe with her, helping her to buy expensive diamonds in Italy, Dubai and Lebanon. It was gathered that when some forces within Obasanjo moved to curtail the friendship between Stella and Shagaya, the late first lady stood firmly against such move. But the moment she died, Hajia Shagaya was reported to have extended a hand of friendship to Obasanjo. But this was nipped in the bud by the powerful forces within Aso-Rock.

In 2007, after the late President Umar Yar’Adua came into power, Hajia Shagaya shifted camp and became a close friend to his wife, Hajia Turai. It was gathered that she even hosted a series of parties on her behalf. And she was always quick to flaunt her closeness with Turai. But Hajia Shagaya was shocked to discover that Turai was not an easy nut to crack. She became more irritated when she noticed that the former first lady was not interested in assisting or entertaining any patronage from anyone. Moreover, the likes of Toyin Fagbayi, who was the closest person to Turai at that time, cut off and blocked Hajia Shagaya’s chances of enjoying contract patronages from Turai.

It didn’t then come as a surprise to most people when Goodluck Jonathan assumed the position of power, and Hajia Shagaya emerged as a close ally of his wife. Ever since the tide changed in favour of the Jonathan, Hajia Shagaya has become a permanent item in their family. It is gathered that she acts a front for the first lady and they do many business deals together.

Some sources disclose that Hajia Shagaya is presently working against the nomination of Deziani Allison Madueke, the former Minister of Petroleum, as a minister. This is because Madueke is believed to have frustrated her bids for oil deals, when she discovered that Hajia Shagaya was going out of her way to get close to President Jonathan.

Be that as it may, close family friends of the Jonathan are reported to be getting worried over his wife’s closeness to Hajia Shagaya because of her past records of betraying her friends. (source: Aristocrat)