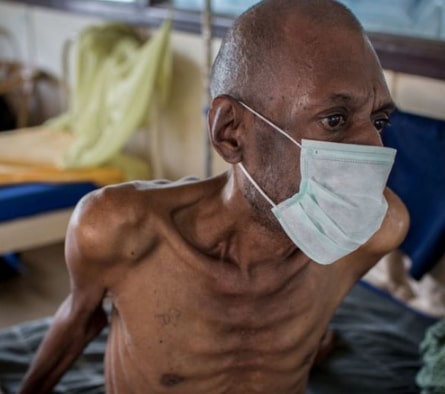 TB Infection Rate In Nigeria At All Time High, Nigeria Has The Highest Number Of Tuberculosis Infection In Africa – NTBLCP

The National Tuberculosis and Leprosy Control Programme (NTBLCP) department of the Federal Ministry of Health has said that Nigeria has the highest number of people infected with Tuberculosis (TB) in Africa.

The National Coordinator of the NTBLCP, Dr. Adebola Lawason, who made this known at the workshop organized in collaboration with Breakthrough Action and United States Agency for International Development (USAID) for health reporters in Nasarawa on Monday said that Nigeria is the 6th highest burden of TB patients globally and the first in Africa.

Represented by Mrs. O. Shofowora, she said: “Tuberculosis is one of the top 10 causes of death nationwide, and Nigeria is classified among the 30 countries of the world with high burden of TB, Multi-Drug Resistant TB (MDR-TB) and TB/HIV.

“Tuberculosis is caused by a bacteria known as Mycobacterium tuberculosis, which affects mostly the lungs. It is called Pulmonary Tuberculosis.

“Our goal is to achieve a 50% reduction in the TB prevalence rate and a 75% reduction in TB mortality rate, that is, excluding those that are co-infected with HIV by 2025.”

A 2017 global report by the World Health Organization (WHO) reveals that an estimated two out of every 1,000 Nigerian will have TB every year. This is an estimated figure; the actual figure might be scarier.

“Most people who are infected the most with TB are within the reproductive ages of 15 years to 44 years.

“Also, one single person with Pulmonary TB can infect between 10-15 people in a year. This is an estimate.

“At least 18 people die every hour as a result of untreated and unattended cases of TB. The awareness of TB is very low, and some people don’t even want to know.

Read Also: Tuberculosis-infected inmate freed
“The TB bacteria can be suspended in the air for up to 8 hours; that is, between 4-8 hours. The bacteria cannot strive under sunlight or in a place that is well ventilated.”

The prevalence of Tuberculosis is very high in the country because the level awareness is low primarily because of the insufficiency of funds for the programme at the national, state, and local government levels.

She urged everyone – private sector, philanthropist, etc., to join the fight to end the spread of this deadly disease as government cannot do it alone.

“TB is transmitted when an infected person coughs, sneezes, or spites into the atmosphere.

“Persistent cough of up to two weeks or more may be due to TB and may need further investigation. Our health seeking behavior is that we go to the chemist first before going to the hospital; we need to change this behavior.

“Loss of weight, excessive sweat, loss of appetite are part of the signs of TB. TB is curable and the patient is not infectious after two to three weeks of treatment. The test and drugs are also free at least in all public hospitals and some private hospitals.

“If anyone shows some of the signs of TB, all the person needs to do is subject himself to test. If it is confirmed to be TB, the drugs will be given to him for free.

“Once a patient is put under a medication, he or she must finish the drugs so that the bacteria is totally expunged from the body.

“Preventive measures: Avoid poorly ventilated and overcrowded environments. Cover your mouth properly when coughing and not spitting indiscriminately in the public.

“Early detection of TB, diagnosed promptly, and early commencement of treatment will reduce the ability of the patient to infect other. Also, eating a balanced diet to avoid malnutrition,” she added.

The toll-free number to call is 08002255282 if you have any of the above signs or symptoms for further guidance.