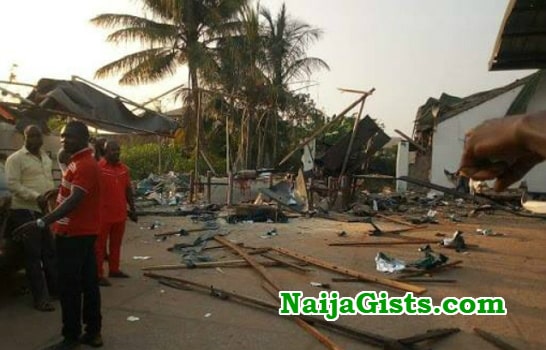 Panic struck in Obinze, a community in Owerri west LGA of Imo state on Saturday following an explosion that rocked a building in the area.

According to Southern City News, the explosion caused panic in the area as people, including worshipers, ran for safety.

An eyewitness said the bomb planted on a wall exploded around 7:15pm.

According to the witness, the explosion occurred in a Worship centre located inside Practising School in Obinze community.

The building being used as a worship centre for Jesus Discipline Fellowship exploded but no life was lost.

Here is what the witness told Southern City News.

“We came for prayer and discovered that the wall of the hall where we worship was tampered with.

“Out of curiosity, we started making findings and we later saw a rope covered with pipes and buried in the ground, which was connected to the wall.”

James added that when the rope was touched, the hidden device exploded.

The Explosive Ordinance Department of Imo State Police command has condoned off the area.