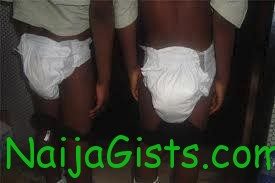 To their surprise, they found both men wearing cocaine-filled pampers.

To make a long story short, the men pleaded for forgiveness attributing poverty of all kinds to their actions.

They confessed this is their very first time and vow to never engage in such again.

However their plea made no impact as they were detained and would be charged later, says the NDLEA spokes person.

Some people are funny sha!