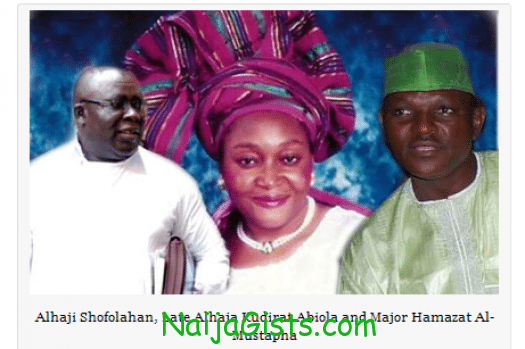 Finally, justice has been served over the brutal murder of late Kudirat Abiola, the wife of Pa MKO Abiola.

Al Mustapha and his partner in crime, Lateef Sofolahan has both been sentenced to death by hanging Kudirat’s murder. naijagists.com

Read the detail report from PM news below

“Justice Mojisola Dada of a Lagos High Court this evening sentenced former Chief Security Officer, CSO, to the late General Sani Abacha, Major Hamza Al-Mustapha and Lateef Sofolahan to death by hanging for their roles in the murder of Alhaja Kudirat Abiola, wife of the late Chief MKO Abiola.

Shofolahan was the personal aide to the late Kudirat.

The court held that from the evidence before it, it was established that Al-Mustapha gave arms and ammunition to Sergeant Barnabas Jabila a.k.a. Sergeant Rogers, from Abuja to Lagos and provided logistics from Abuja to Lagos to meet Shofolahan to murder Kudirat Abiola.

In the judgement which lasted about eight hours, Justice Dada said the evidence provided by the prosecution were manifestly reliable and that the defendants murdered Kudirat Abiola.

She said the prosecution has proven its case beyond any reasonable doubt.

Responding to the verdict, the lead counsel to Al-Mustapha and Shofolahan, Mr. Olalekan Ojo said his clients will appeal the judgement.

Al-Mustapha’s supporters who besieged the court were confused and speechless after the eight-hour judgement was delivered.

The convicts were whisked away by security agents after the judgement was delivered.

Al-Mustapha, the former chief security officer to the late military head of state, General Sani Abacha, and Sofolahan were tried on a two-count charge of conspiracy and murder.

The men were alleged to have been involved in the 4 June, 1996, murder of Alhaja Kudirat Abiola, wife of the late businessman and politician, Chief Moshood Kashimawo Abiola.

The trial suffered several adjournments as a results of numerous applications that needed to be resolved before trial.

During the trial, state’s key witnesses, Sergeant Barnabas Jabila (aka Rogers), and another soldier, Mohammed Abdul (aka Katako), recanted on their roles in the alleged murder and how the crime was committed.

They had earlier told the court that Sofolahan, acting as Kudirat’s aide, gave them information on her itinerary, which aided them in accomplishing their task of eliminating her. Kudirat was on her way to the American embassy on the day she was killed at the Toll Gate end of the Lagos-Ibadan Expressway. The Lagos government under the Tinubu administration had built a cenotaph near the scene of the murder.

Jabila, a member of the special security outfit established to protect Abacha and his family, had also confirmed he fired the shot that killed Kudirat, while Abdul, who served as personal driver to Mohammed, narrated how they (himself and Jabila) went out the day after meeting Sofolahan, trailed a white Mercedes Benz car from Ikeja to the old Lagos toll gate and how Jabila shot at the car and directed him to drive back to Dodan Barracks where they were staying.

In his evidence-in-chief, Jabila narrated how he was, some days before Kudirat’s assassination, summoned by Al-Mustapha to his office in Aso Rock, handed some bags containing guns, and briefed on “ a special assignment”.

He also told the court that Sofolahan provided them with information about Kudirat’s movement and even led them to her residence after which his team planned strategies for the operation.

Jabila also said Sofolahan’s information aided them in trailing Kudirat until he shot her on 4 June, 1996 in the car driven by Abdul.

He said he once worked with Mohammed’s late senior brother, Ibrahim, but had his service transferred to Mohammed after the latter’s death.

The revelations were stunning but with time and after the matter had passed through several judges, Jabila and Abdul recanted during cross-examination, denying all their earlier evidence.

They later blamed their strange decision to somersault on their allegation that the state reneged on its promise to compensate them materially after the trial.

They alleged that the state failed to fulfil its promises, under the witness protection programme, to reward them and their families for acting as prosecution witnesses.

The case also suffered some hiccups after the fourth prosecution witness, Yusuf, who allegedly obtained statements from Al-Mustapha during investigation, also, midway into his testimony, refused to cooperate with the prosecution.

He allegedly refused to attend court, a development that forced the court to close the prosecution’s case in July after several adjournments.

Opening his defence, Al-Mustapha who witnessed for himself, denied all the allegations against him. He particularly denied sending anybody to kill Kudirat. Apart from this, he denied any knowledge of sending any emissary or sponsored anybody to kill the victim and also monitor the activities of NADECO members.

But he was confronted with his statement, from which he read to the court a portion, where he admitted sending Rabo Lawal to monitor a NADECO rally in Lagos. On Kudirat, the prosecution confronted him with a statement by Mohammed Abacha, contained in the Supreme Court’s judgment in an interlocutory appeal by Mohammed, and upon which he was freed.

In the statement, part of which was read to the court by the lead prosecution lawyer, Lawal Pedro, SAN, Mohammed admitted witnessing where Al-Mustapha gave Jabila a bag containing guns.

This was vehemently opposed by Al-Mustapha’s counsel, Mr. Olalekan Ojo.

Also, Al-Mustapha, who earlier testified not to have tortured anyone in his life, later admitted, during cross-examination, that he tortured Turner Ogboru.

He also admitted that, as trained military personnel, he could take lives in public interest. The defence also called a retired army personnel, Kyari Gadzama, who worked as an aide to Al-Mustapha, who testified in his favour.

He admitted knowledge of Kudirat’s assassination, but said he heard of it from media reports. He also denied accompanying his ex-principal always to every of his engagements and meetings.

In his own testimony on 17 August, 2011, which almost turned the court into a theatre, Sofolahan, the third defence and last witness, also testified for himself. In his own testimony, he denied involvement in the offences for which he was accused.

To the chagrin of those present in court, he denied ever working for any member of Abiola family or was a personal assistant to Kudirat.”

No matter how far deceit may have gone, the truth will always catch up sooner than later. Hope other security officers will learn a lesson from him.