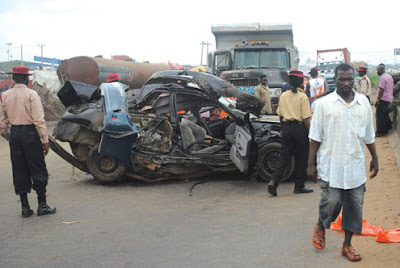 Two freshman students of Nigeria’s Federal University of Agriculture, Abeokuta (UNNAB), were killed on Friday by a hit-and-run motorist, now at large.

Witnesses said that the incident happened at about 7.30 p.m. in front of Isolu Muslim High School, Alabata, about a kilometre away from FUNNAB. The driver of the vehicle, a golden jeep, was said to be on top speed and trying to avoid a collision with a vehicle from the opposite direction, when he suddenly swerved and ran into the students, who were said to be returning home from school.

The driver abandoned the vehicle and ran away while other students around made an unsuccessful attempt to apprehend him.

The development was said to have caused a rumpus as angry students took to the streets and began to destroy property including the jeep, which was set ablaze.

Mr Kola Adepoju, the institution’s Public Relations Officer, who confirmed the incident, described it as unfortunate.

Adepoju, who said the issue had been reported to the police, expressed optimism that the driver would soon be apprehended .

He also confirmed that normalcy had returned to the area following the intervention of the police.

According to him, Monday has been declared lecture-free to mourn the students.

“We lost two of our students. They were hit by a reckless driver who was on top speed. As he was avoiding a head-on collision with an oncoming vehicle, he rammed into the two students who were on their way home. There has been a protest over the incident. Vehicles were not moving before, but now everything is under control,” Adepoju said.

He said the corpses of the students had been deposited at the state General Hospital, Ijaiye in Abeokuta.