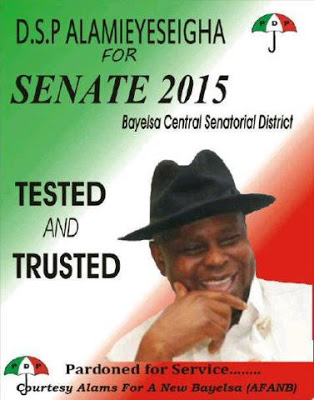 March 16, 2013 – Ex-Bayelsa Governor, Convict Alamieyeseigha To Contest For Senate In 2015

Ex-Nigerian convict who was pardoned by President Goodluck Jonathan has plans to run for the Senate in 2015.

According to sources, he was pardoned in a bid to fulfill his senatorial ambition in Bayelsa central senatorial district.

This is the man who stole several billions of Naira from Bayelsa state during his tenure in office.

Keep in mind that the President of Nigeria, Goodluck Jonathan is from Bayelsa state.

What a country we live in…. There is no justice anywhere.