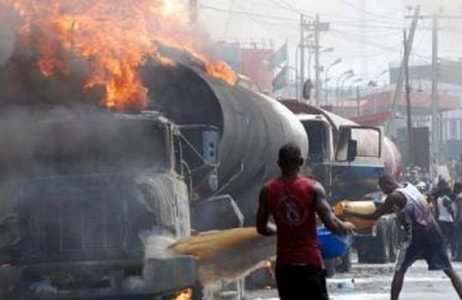 Corrupt military officers have been blamed for a tanker fire that took the lives of 10 person at Ekreravwe junction on East/west in Ughelli North Local Government Area of Delta State.

According to witnesses, about five private and commercial vehicles, including a fuel tanker, got burnt in the accident, which occurred at an Army checkpoint. Many were injured in the multiple crash.

Eyewitnesses said the accident occurred when soldiers attempted to stop the driver of the fuel tanker.

But they, however, could not explain the fire that engulfed the five vehicles as occupants were rushing out with burns.

A source said it was possible the tanker driver lost control, spilling fuel, which might have caused the fire.

Many victims, rushed to hospital, died as the Joint Health Sector Union (JOHESU) was on strike.