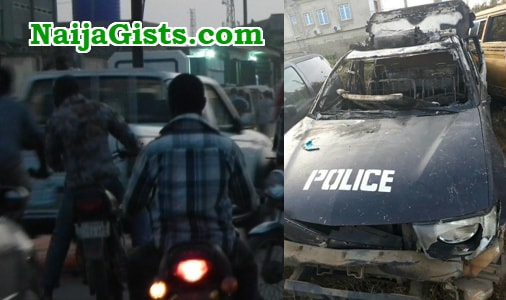 The Lagos State Police Command has released a press statement on the unfortunate incident that happened in Ikorodu today.

“Lagos State Police notes with regret the unfortunate burning of a police patrol van stationed at a black spot in Ibeshe, Ipakodo area of Ikorodu, Lagos state by irate motorcyclists popularly called okada riders, today, 30/05/2018, at about 10.45am..

The incident was occasioned by an encounter between policemen manning the black spot and an okada man plying the routes way beyond Lagos state approved time of 10pm.

As he approached the police pin down point, the police team observed that he was carrying a passenger with a big bag placed between him and the rider and so they flagged him down but instead of obeying the police hand signal, the okada man increased his speed in order to evade police scrutiny. Sadly, he ended up in a ditch and passed on. Meanwhile his associate with the suspicious bag vanished into the thin air.

However, today, 30/05/18, at about 10am, Okada riders sympathetic to their late colleague, mobilised in their thousands and attempted to burn the Ibeshe Police Post. They were resisted. So they moved and found a softer target which was a police van stationed at a known black spot in Ibeshe and set it ablaze.

In view of this incident, the police authorities in Lagos state wishes to warn all those with the penchant to burn, destroy or loot its property/armoury, that henceforth the Command will be compelled to use all lawful means including the use of firearms to protect such properties and defend its personnel.The police in Lagos will no longer standby and watch hoodlums destroy government property worth millions of Naira for whatever reason.

Any group of persons with complaints against the police action, must toe the civilised option of registering their complaints with the police authorities for appropriate action.

The CP Lagos has directed that the sixty three okada riders arrested for burning the police vehicle should be charge to court for arson. He has also directed the OC Legal to file a motion to a court of competent jurisdiction to surcharge the suspects for the purchase of another police patrol vehicle.”