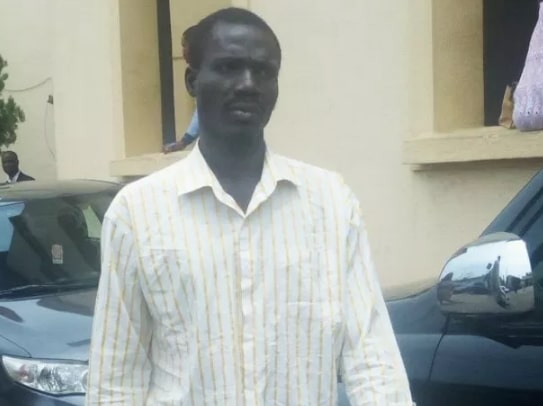 Allen Abiodun, a student of  the University of Abuja was yesterday sentenced to death by an Ikeja High Court, Lagos, for killing his younger brother, Allen Wale, with a broken bottle.

Justice Raliat Adebiyi found Abiodun guilty and convicted him of the offence of murder, contrary to Section 221 of the Criminal Law of Lagos State 2011 after six years of trial.

33-year-old Abiodun was arraigned on February 20, 2013 for killing his brother, Wale, at Imude Village, Oto-Awori, Lagos.

The convict confessed to killing his brother, Wale.

Following his confessional statement and the evidence of other prosecution witnesses, Justice Adebiyi sentenced Abiodun to death as charged.

She said the prosecution had proved its case of murder beyond reasonable doubt .

”The defendant is hereby found guilty and convicted of the murder of his brother, Allen Wale.

“You, Allen Abiodun, is hereby sentenced to death by hanging. May God, the giver of life, have mercy on you”, Justice Adebiyi said.

Ahmed-Muil also told the court that the convict attacked his younger brother with a broken bottle, stabbed him several times at the right side of his neck, dragged his body to a bush and covered it with leaves.

One of the witnesses, Sunday Abogunrin (PW2), the landlord of the convict, had testified that Abiodun was a troublesome fellow who fought his siblings at every slight provocation.

Abogunrin, a building contractor, told the court that he caught the convict dragging the body into a bush after he had killed the deceased.

According to the PW2,

“On February 20, 2013, at about 1-2am, I heard dogs barking. Initially, people around were afraid to come out to find out what was scaring the dogs for fear of robbers, but later they all came out, including me.

“I thereafter went out to investigate the cause of the noise. But I noticed someone dragging something into a nearby bush. I initially wanted to raise the alarm, but instead, I put my torch on and the person ran off towards the defendant’s house.

“I immediately followed to see who it was, only to meet the defendant washing his hands, covered in blood, near a well. I quickly alerted the Baale (traditional ruler) of the community, who then ordered the youth to apprehend him.”

Abogunrin further told the court that the convict also broke his sister’s hand and smashed his other brother’s head while attempting to escape when the youth came to apprehend him.

“He was finally apprehended through the help of some Oodua Peoples Congress (OPC) members, who intervened and took him to the Baale’s palace,” Abogunrin said.

Assistant Superintendent of Police (ASP) Uthman Lamidi, the Investigating Police Officer from llemba Hausa Police Station, said he was on duty when the report about the incident was lodged.

He said he and his team went to the Oba’s palace, arrested the defendant and went with him to the crime scene.

The IPO stated that at the scene, he saw the body and upon interrogating the defendant, he admitted killing his younger brother with a broken bottle and was about to bury the body when he was intercepted.

“I handcuffed the defendant and took him away. The defendant followed me willingly and confessed killing his younger brother. His confession was read over to him and he signed it while I countersigned. In the course of investigation, we also discovered that the defendant had threatened to kill his late brother several times before actually doing it that day,” he said.

The convict claimed that the deceased was not his biological brother, but admitted killing him.

“He told me that he would kill me if I was not careful of him. He kept threatening me until I got up angrily, took a bottle and stabbed him in his right neck. He fell down, I went to him and told him that he would bleed and die, which he eventually did.

“When he died, I dragged his body to a nearby bush to bury it. I hid his body and covered it with leaves so that no one would see it. I then went back home and washed off the blood stains on my hand,” he said.