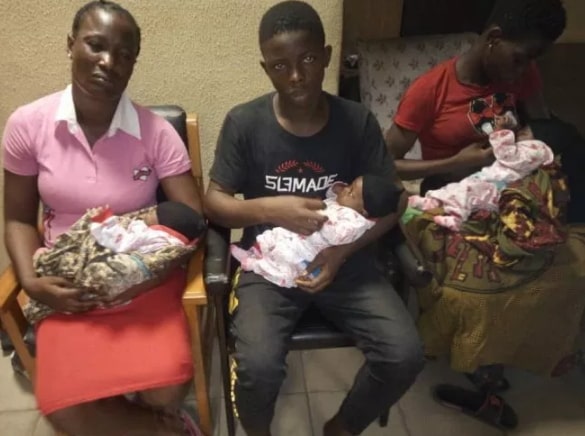 The Rehabilitation and Rescue Department of the Lagos State Ministry of Youth and Social Development on Monday rescued triplet who were being used as an object for begging by their mother.

Personnel of the Nigerian Army, who pleaded anonymity, seized Uchechi Chi, mother of the children with her one month old triplet from furthering the illegal practice around Ikeja GRA.

He took the mother and the children to Bond FM where they were rescued by officials of the Lagos State Government rescue unit.

The mother was reported to have just arrived Lagos from Obosi, Anambra State on Sunday evening for fear of being killed by cult members.

Narrating her ordeal, Uchechi said she gave birth to triplets on 10th of April after dropping out of St. Monica College in SS3 and also worked as a cook at a restaurant in Obosi, Anambra State after her parent’s demise.

According to her, she fled Obosi on Saturday night and arrived Lagos on Sunday for fear of being killed by cultist with her children.

She alleged that the father of the triplets belonged to a cult group and abandoned her and the triplets due to ongoing rival cult clash which sought to take his life.

Reacting to the operation, Commissioner for Youth and Social Development, Agboola Dabiri, said the rescue was an attestation that Lagos State Government was against any form of abuse on children as well as street begging.

Agboola, who expressed displeasure at the fate of the children, directed officials of the ministry to take the triplets into custody at government’s rehabilitation home for shelter and rehabilitation while social investigation continued.

Chi and her triplets have been taken to one of the State General Hospital for medical treatment.