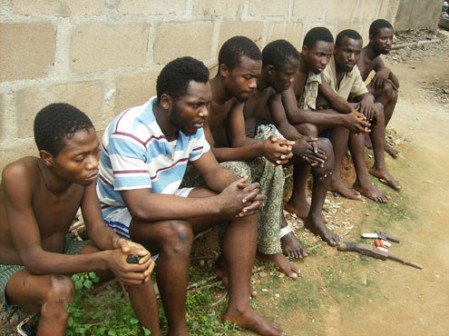 Other members of the gang are Alao Samson, Christopher Obanugo, Godwin Atanu and Okwuchukwu Ntagu.

According to the police, the gang specialises in stealing vehicles from motorists in Benin metropolis and selling them to car dealers and other prospective buyers.

Speaking to journalists, the political scientist confessed that he bought a Lexius RX 300 from a gang of car snatchers for N500,000, made a part payment of N120,000 and took the vehicle to Atanu, a spray painter who allegedly repainted the car from gold to oxblood.

“‎I made a part payment (N120,000) of the amount he mentioned. I changed the colour because I actually suspected that it was not genuine; I had already got myself involved,” he said.
On his part, the Spray Painter, Godwin Atanu, who claimed not to be aware that the vehicles were stolen, claimed that he was only a conventional spray painter.‎

‎Also in his confession, one of the suspects, Samson, w‎ho hails from Osun State and claimed to be an electrician, said he usually disguised as a mechanic called to fix a vehicle and made away with the vehicles when the owner submitted their car keys.

According to the police, the suspects had begun to dismantle one of the vehicles in order to sell its parts in various motor spare parts markets, before they were arrested by security operatives.
Edo Police spokesman, DSP Abiodun Osifo, who paraded the suspects, said‎ they ‎were arrested on March 8, following a tip off, after allegedly stealing five cars from unsuspecting members of the public.

The suspects were alleged to have sprayed two of the stolen cars, a Ford Focus, a Toyota Matrix with different car paints to conceal their original colours.

“These are suspects who specialise in car snatching within Benin and neighbouring communities. On February 18, 2016, a Nissan car was snatched by three armed men at gunpoint from the owner. And since, we have been on the trail of these armed robbers.

It paid off three days ago on a tip off that a vehicle was being vandalised at a hideout, at a specific location,” Osifo said.