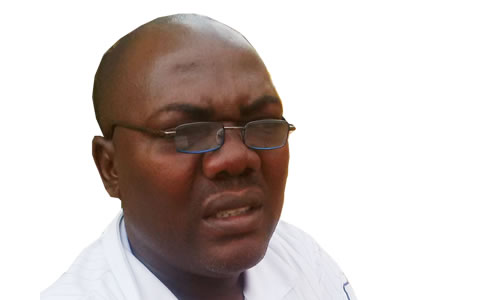 A part time lecturer teaching accounting at the University of Lagos, Akoka Campus accused of raping a lady seeking admission has confessed.

Dr Akin Baruwa broke his silence yesterday on why he had forceful carnal knowledge of an 18-year-old teen entrusted to him by his friend to help her gain admission.

Baruwa who said the sex was consensual accused the lady of seducing him.

“I swear to God that the girl agreed to everything that happened. She was a chatty girl, who did not show any shyness. It is true that I took her to YABATECH and showed her places. What is not true is that I deliberately took off from home because of any plan to do anything bad to her. I took off from home that early to avoid traffic.

When she was in my office, she was the one telling me to be free with her. I realised that I needed to lie down a little and did not want my shirt to be rumpled. When I pulled it off, she even told me not to mind her presence that since it was my office, I could do whatever I wanted.

When we first got to the office, she lay on my chest and was even playing with my manhood. That was why I could not resist it. After we came back from seeing the woman who was supposed to help with her admission, she was about to go when I told her to give me a hug. It was that which now led to the actual sexual encounter.

When I realised that I could not resist her, I had to tell her to let me put on a condom. The truth is that, while I was putting on a condom, she stood by and waited. I did not actually penetrate. When she was saying ‘it’s enough, it’s enough’ and complaining that her tummy had started hurting her, I stopped.”
Baruwa explained that Shola’s father had sent a cryptic text message to him (days later when he learnt of what happened to his daughter), saying that he had learnt of what he did to his daughter.

“I know I betrayed his trust but nobody would understand it was consensual. I would have reached out to him to beg him if I think it would solve the problem,”.

Read the victim’s side of the rape saga below:

“While I was inside the car, he started to touch my hair and rub my head. I was very surprised and I brushed off his hand. He never tried it again till we got to UNILAG. While we were on the way, he asked if I go out at all and I told him I don’t usually go out. And he would show me a place and say ‘This is Maryland o. You may not know since you don’t go out.’ Then he took me to the Yaba College of Technology. He drove inside and showed me the place. We later proceeded to UNILAG.

When we got to his office, it was about 6.30am. The offices in the building were deserted. He said he liked to be early to avoid traffic. He told me to sit on the couch in his office.
I noticed he was restless. He would stand and go outside sometimes. He asked if I wanted anything, I told him I was fine. He put on the television; I told him I was okay. He put on the air conditioner and I told him I did not want that.

He had already heated water and made Coffee, which he offered to me. I told him I was okay and really did not need that. He then put the hot Coffee on the table. Later, out of respect, I took the cup and sipped a little. I started to feel drowsy not long after that. I did not know why.”
He kept standing and moving around the office. Later, he went outside and when he came back inside, he locked the door and kept the key on his table. I did not know what was happening.

“Moment later, he told me to pick up a paper for him beside the couch. As I bent down to pick up the paper, he pushed me into a corner of the couch and held me down as he forcibly removed my trousers and underwear.”

I guess there is more to this story we are not hearing.

Meanwhile, Baruwa has been remanded at the Kirikiri prison because he couldn’t fulfill his bail term.