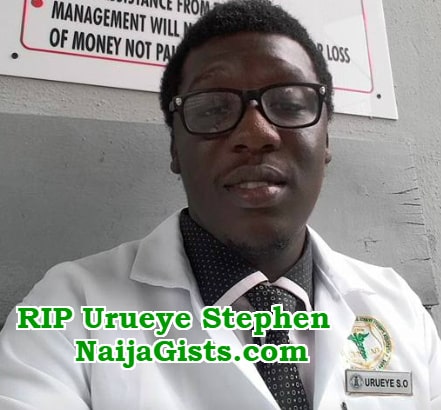 Check out a young man who worked really hard for over seven years to become a medical doctor only for robbers to kill him hours after graduation.

Dr Stephen Urueye who lost his father years ago was a House officer with Lagos State Teaching Hospital, LUTH.

He was among those who graduated from the University of Lagos College of Medicine on Wednesday.

According to information from his colleagues, Urueye was killed by some armed thugs who wanted to rob him of his valuables near LUTH gate in Idi Araba Mushin Lagos on Thursday.

Although he escaped from them, he suffered a severe knife wound to the thigh.

After the attack, Urueye ran into LUTH compound with blood gushing out of his thigh where he was rushed to the ICU.

His colleagues tried really hard to revive him but sadly, he lost his battle around 3am on Friday morning.

Urueye’s corpse has been deposited at LUTH mortuary.

Sadly, the robbers didn’t let him enjoy the fruit of his hard work.

Urueye, the only child of a widow was killed on the day he got his first pay.

May God comfort his mother.