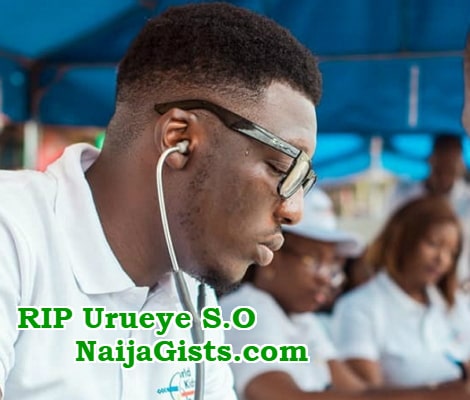 Emotions ran high in LUTH, Idi-Araba on Friday as soon as news of his death broke with many medical students of LUTH embarking on a protest.The protesters carried placards with various inscriptions and calling for justice for the victim.

According to them, Idi-Araba has been overtaken by armed thugs. They called on the government and security agencies to beef up security in the area.Some of his colleagues and other Nigerians took to Twitter to lament Urueye’s murder and also seek justice for him with the hashtag #JusticeForStephen.

They lamented that they have complained severally to the management of the hospital as regards incessant attacks of fellow students in Idi-Araba by armed hoodlums.

A 500-level Nursing student at the College of Medicine, University of Lagos (CMUL), Harrison Udeh, said Urueye was stabbed around 9pm on Thursday.

Udeh told The Nation that the late Urueye “was outside between 8 and 9pm along the Canal near LUTH gate. Apparently, he was assailed by robbers.

It enters the thigh from behind the inguinal ligament as the continuation of the external iliac artery.) That led to bleeding and he had to run into the gate and he was taken to the teaching hospital.“His (Urueye’s) classmates with other doctors because his classmates are class officials too attended to him.

“They tried PR (Preliminary Restoration) for three hours but at the end of the day, we lost him. It was sad.“He gave up between 3 and 4am. Actually, 3:43am was the time we were given by his classmates as the time of passage.”

The protest, he said, was to draw the attention of the management to the insecurity in the area.“This morning, we all decided that something had to be done because people have complained about issues along the road being robbed.“Students have been beaten along this road and it has been happening frequently.

The Chief Security Officer for LUTH said reports have been made to the Itire Police Station.“There are patrols along the area but the problem with the patrol is that the hoodlums or the robbers can actually watch out for when the patrol pass, and do whatever they wanted to do after the patrol has passed.“So, it is not an effective way of curbing the robbery incidents.

They’re supposed to have a police vehicle station along the route because it is a hot spot for robbery,” he said.

DSP Elkana said the two suspects were arrested immediately after the matter was reported to the police.“

They are hoodlums. The incident happened on Thursday and we got their report on Friday.

He (The late Urueye) left the school, he was going with his friends to somewhere.“He was attacked by some hoodlums around the lagoon. They snatched his phone and stabbed him.“Then, he subsequently died in the hospital while receiving treatment,” he said.

The late Urueye’s colleagues and students held a Candle Light for him on Friday night with a call on the government to bring the perpetrators to book.

They equally called on the management of LUTH and UNILAG to ensure adequate security for the students and the doctors.

How UNILAG Medical Graduate, LUTH Doctor Stephen Urueye Was Killed By Robbers Hours After Graduation
What To Do When You Feel Like Giving Up On Your Dreams